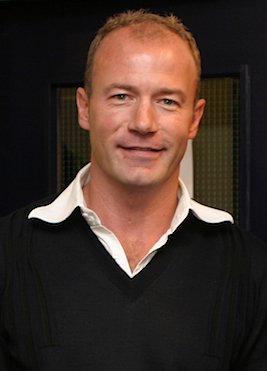 Alan Shearer, English footballer and manager
Alan Shearer CBE DL (born 13 August 1970) is an English football pundit and retired football player and manager who played as a striker. Widely regarded as one of the best strikers of his generation and one of the greatest players in Premier League history, he is the Premier League's record goalscorer. He was named Football Writers' Association Player of the Year in 1994 and won the PFA Player of the Year award in 1995. In 1996, he came third in both Ballon d'Or and FIFA World Player of the Year awards. In 2004, he was named by Pelé in the FIFA 100 list of the world's greatest living players. Shearer was one of the first two players inducted into the Premier League Hall of Fame in 2021.Shearer played his entire career in the top level of English football. He started his career at Southampton in 1988 before moving to Blackburn Rovers in 1992, where he established himself as among the most prolific goalscorers in Europe. Whilst at Blackburn Rovers, he won the 1994–95 Premier League, as well as two consecutive Premier League Golden Boots. In the summer of 1996, he joined his hometown club Newcastle United for a then world record £15 million. He led Newcastle to the 1998 FA Cup and 1999 FA Cup finals, and eventually became the club's all-time top scorer. He retired at the end of the 2005–06 season.

Since retiring as a player in 2006, Shearer has worked as a television pundit for the BBC. In 2009, he briefly left his BBC role to become Newcastle United's manager in the last eight games of their 2008–09 season, in an unsuccessful attempt to save them from relegation. Shearer is a Commander of the Order of the British Empire (CBE), a Deputy Lieutenant of Northumberland, a Freeman of Newcastle upon Tyne and an honorary Doctor of Civil Law of Northumbria and Newcastle Universities.