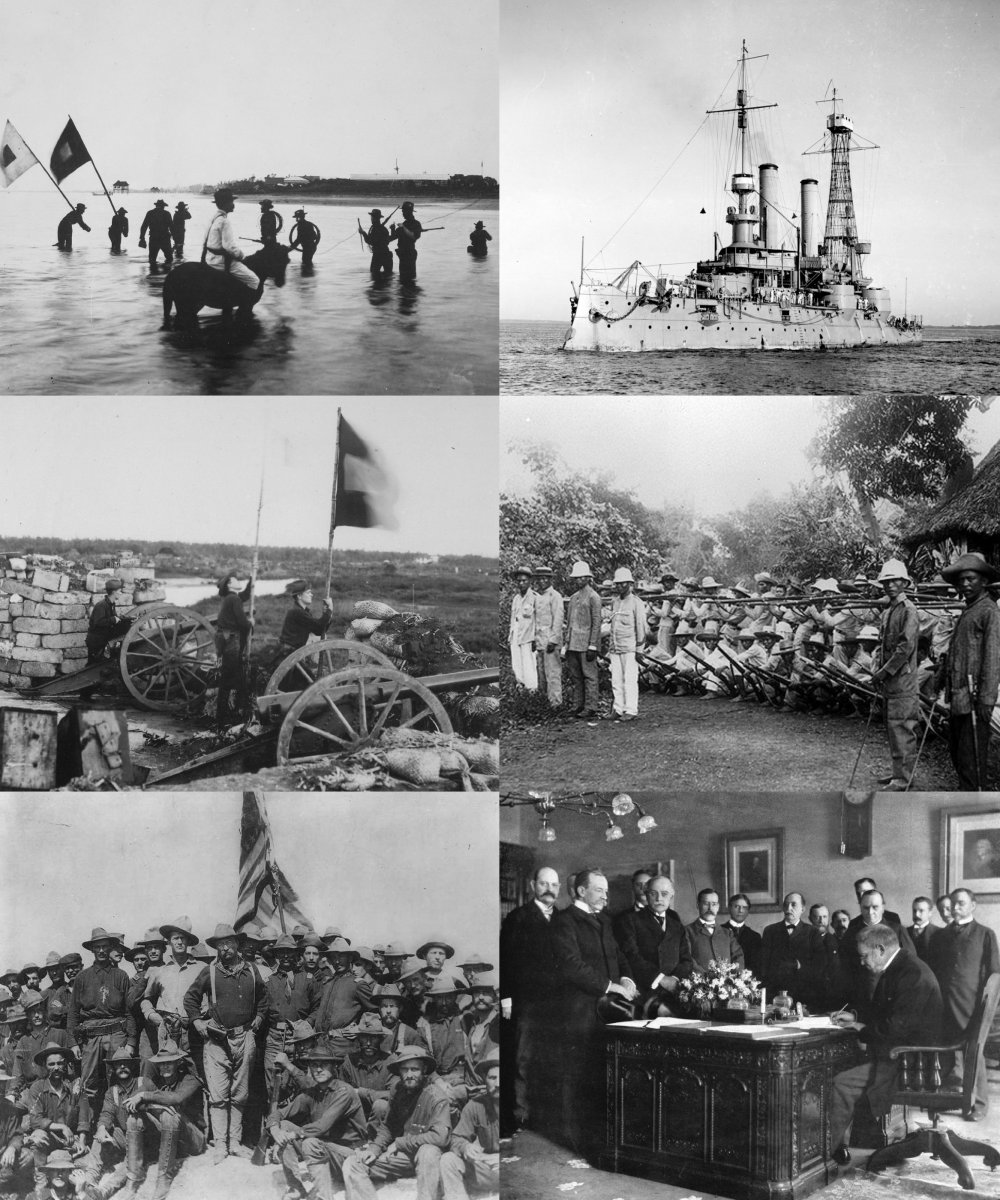 Spanish-American War: Spanish and American forces engage in a mock battle for Manila, after which the Spanish commander surrendered in order to keep the city out of Filipino rebel hands.

The Battle of Manila (Filipino: Labanan sa Maynila; Spanish: Batalla de Manila), sometimes called the Mock Battle of Manila, was a land engagement which took place in Manila on August 13, 1898, at the end of the SpanishAmerican War, four months after the decisive victory by Commodore Dewey's Asiatic Squadron at the Battle of Manila Bay. The belligerents were Spanish forces led by Governor-General of the Philippines Fermn Judenes, and American forces led by United States Army Major General Wesley Merritt and United States Navy Commodore George Dewey. American forces were supported by units of the Philippine Revolutionary Army, led by Emilio Aguinaldo.

The battle is sometimes referred to as the "Mock Battle of Manila" because the local commanders of the Spanish and American forces, who were legally at war, secretly and jointly planned the battle to transfer control of the city center from the Spanish to the Americans while keeping the Philippine Revolutionary Army out of the city center. The battle left American forces in control of Intramuros, the center of Manila, surrounded by Philippine revolutionary forces, creating the conditions for the Battle of Manila of 1899 and the start of the PhilippineAmerican War.

The Spanish–American War (April 21 – August 13, 1898) was period of armed conflict between Spain and the United States. Hostilities began in the aftermath of the internal explosion of USS Maine in Havana Harbor in Cuba, leading to U.S. intervention in the Cuban War of Independence. The war led to the U.S. emerging predominant in the Caribbean region, and resulted in U.S. acquisition of Spain's Pacific possessions. It led to U.S. involvement in the Philippine Revolution and later to the Philippine–American War.

The main issue was Cuban independence. Revolts had been occurring for some years in Cuba against Spanish colonial rule. The U.S. backed these revolts upon entering the Spanish–American War. There had been war scares before, as in the Virginius Affair in 1873. But in the late 1890s, American public opinion swayed in support of the rebellion due to reports of concentration camps set up to control the populace. Yellow journalism exaggerated the atrocities to further increase public fervor and to sell more newspapers and magazines.The business community had just recovered from a deep depression and feared that a war would reverse the gains. Accordingly, most business interests lobbied vigorously against going to war. President William McKinley ignored the exaggerated news reporting and sought a peaceful settlement. However, after the United States Navy armored cruiser Maine mysteriously exploded and sank in Havana Harbor on February 15, 1898, political pressures from the Democratic Party pushed McKinley into a war that he had wished to avoid.

On April 20, 1898, McKinley signed a joint Congressional resolution demanding Spanish withdrawal and authorizing the President to use military force to help Cuba gain independence. In response, Spain severed diplomatic relations with the United States on April 21. On the same day, the U.S. Navy began a blockade of Cuba. Both sides declared war; neither had allies.

The 10-week war was fought in both the Caribbean and the Pacific. As U.S. agitators for war well knew, U.S. naval power would prove decisive, allowing expeditionary forces to disembark in Cuba against a Spanish garrison already facing nationwide Cuban insurgent attacks and further devastated by yellow fever. The invaders obtained the surrender of Santiago de Cuba and Manila despite the good performance of some Spanish infantry units, and fierce fighting for positions such as San Juan Hill. Madrid sued for peace after two Spanish squadrons were sunk in the battles of Santiago de Cuba and Manila Bay, and a third, more modern fleet was recalled home to protect the Spanish coasts.The war ended with the 1898 Treaty of Paris, negotiated on terms favorable to the U.S. It ceded ownership of Puerto Rico, Guam, and the Philippine islands from Spain to the U.S. and granted the U.S. temporary control of Cuba. The cession of the Philippines involved payment of $20 million ($620 million today) to Spain by the U.S. to cover infrastructure owned by Spain.The defeat and loss of the Spanish Empire's last remnants was a profound shock to Spain's national psyche and provoked a thorough philosophical and artistic reevaluation of Spanish society known as the Generation of '98. The United States meanwhile not only became a major power, but also gained several island possessions spanning the globe, which provoked rancorous debate over the wisdom of expansionism.