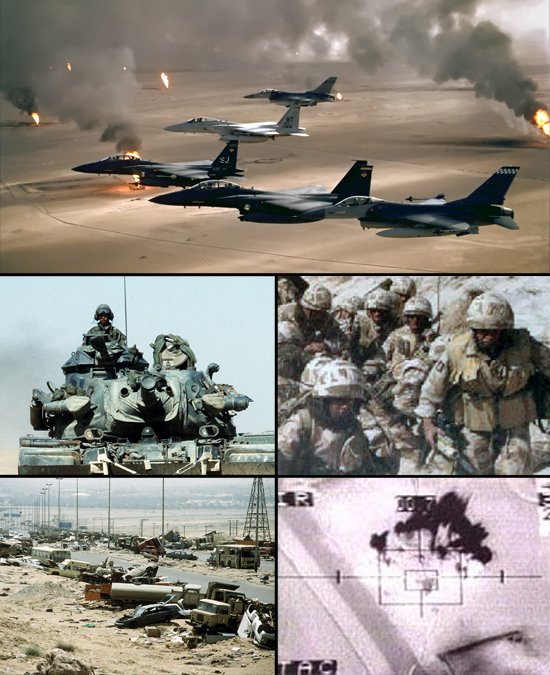 The Gulf War was an armed campaign waged by a United States-led coalition of 35 nations against Iraq in response to the Iraqi invasion and annexation of Kuwait. It was codenamed Operation Desert Shield (2 August 1990 – 17 January 1991) during the pre-combat buildup of troops and the defense of Saudi Arabia, and Operation Desert Storm (17 January 1991 – 28 February 1991) during its combat phase.

On 2 August 1990, the Iraqi military invaded the neighbouring State of Kuwait, and had fully occupied the country within two days. Different speculations have been made regarding the true intents behind the invasion, including Iraq's inability to pay Kuwait the more than US$14 billion that it had borrowed to finance its military efforts during the Iran–Iraq War, and Kuwait's surge in petroleum production levels which kept revenues down for Iraq. Throughout much of the 1980s, Kuwait's oil production was above its mandatory OPEC quota, which kept international oil prices down. Iraq interpreted Kuwait's refusal to decrease its oil production as an act of aggression towards the Iraqi economy. The invasion of Kuwait was met with international condemnation, and economic sanctions against Iraq were immediately imposed by the United Nations Security Council in response. British prime minister Margaret Thatcher and American president George H. W. Bush deployed troops and equipment into Saudi Arabia, and urged other countries to send their own forces to the scene. In response to the call, an array of nations joined the U.S.-led coalition, forming the largest military alliance since World War II. The bulk of the coalition's military forces were from the United States, with Saudi Arabia, the United Kingdom, and Egypt as the largest lead-up contributors, in that order. Kuwait and Saudi Arabia paid around US$32 billion of the US$60 billion cost.The initial conflict to expel Iraqi forces from Kuwait began with an aerial and naval bombardment on 17 January 1991, which continued for five weeks. During this period, Iraq began to launch missiles into Israel with the aim of provoking a response by the Israeli military, which the Iraqi leadership expected to prompt the coalition's Muslim states to withdraw and therefore jeopardize the alliance against Iraq. As the Iraqi missile campaign against Israel failed to generate the desired response, Iraq also launched Scud missiles at coalition targets stationed in Saudi Arabia. This was followed by a ground assault by the coalition into Iraqi-occupied Kuwait on 24 February. The offensive was a decisive victory for coalition forces, who liberated Kuwait and promptly began to advance past the Iraq–Kuwait border into Iraqi territory. 100 hours after the beginning of the ground campaign, the coalition ceased its advance and declared a ceasefire. Aerial and ground combat was confined to Iraq, Kuwait, and areas straddling the Iraq–Saudi Arabia border.

The war marked the introduction of live news broadcasts from the front lines of the battle, principally by the American network CNN. It has also earned the nickname Video Game War after the daily broadcast of images from cameras onboard American bombers during Operation Desert Storm. The Gulf War has gained notoriety for including three of the largest tank battles in American military history.