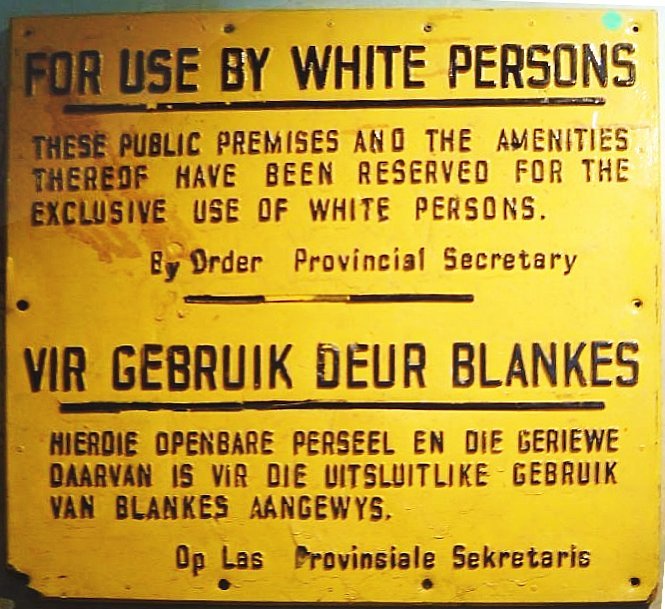 Group Areas Act was the title of three acts of the Parliament of South Africa enacted under the apartheid government of South Africa. The acts assigned racial groups to different residential and business sections in urban areas in a system of urban apartheid. An effect of the law was to exclude people of color from living in the most developed areas, which were restricted to Whites (Sea Point, Claremont). It required many people of color to commute large distances from their homes to be able to work. The law led to people of color being forcibly removed for living in the "wrong" areas. The majority that was people of color, were given much smaller areas (e.g., Tongaat, Grassy Park) to live in than the white minority who owned most of the country. Pass Laws required people of color to carry pass books and later "reference books", similar to passports, to enter the "white" parts of the country.

Apartheid (, especially South African English: , Afrikaans: [aˈpartɦɛit]; transl. "separateness", lit. "aparthood") was a system of institutionalised racial segregation that existed in South Africa and South West Africa (now Namibia) from 1948 until the early 1990s. Apartheid was characterized by an authoritarian political culture based on baasskap (boss-hood or boss-ship), which ensured that South Africa was dominated politically, socially, and economically by the nation's minority white population. According to this system of social stratification, white citizens had the highest status, followed by Indians and Coloureds, then black Africans. The economic legacy and social effects of apartheid continue to the present day.Broadly speaking, apartheid was delineated into petty apartheid, which entailed the segregation of public facilities and social events, and grand apartheid, which dictated housing and employment opportunities by race. The first apartheid law was the Prohibition of Mixed Marriages Act, 1949, followed closely by the Immorality Amendment Act of 1950, which made it illegal for most South African citizens to marry or pursue sexual relationships across racial lines. The Population Registration Act, 1950 classified all South Africans into one of four racial groups based on appearance, known ancestry, socioeconomic status, and cultural lifestyle: "Black", "White", "Coloured", and "Indian", the last two of which included several sub-classifications. Places of residence were determined by racial classification. Between 1960 and 1983, 3.5 million black Africans were removed from their homes and forced into segregated neighbourhoods as a result of apartheid legislation, in some of the largest mass evictions in modern history. Most of these targeted removals were intended to restrict the black population to ten designated "tribal homelands", also known as bantustans, four of which became nominally independent states. The government announced that relocated persons would lose their South African citizenship as they were absorbed into the bantustans.Apartheid sparked significant international and domestic opposition, resulting in some of the most influential global social movements of the twentieth century. It was the target of frequent condemnation in the United Nations and brought about an extensive arms and trade embargo on South Africa. During the 1970s and 1980s, internal resistance to apartheid became increasingly militant, prompting brutal crackdowns by the National Party government and protracted sectarian violence that left thousands dead or in detention. Some reforms of the apartheid system were undertaken, including allowing for Indian and Coloured political representation in parliament, but these measures failed to appease most activist groups.Between 1987 and 1993, the National Party entered into bilateral negotiations with the African National Congress (ANC), the leading anti-apartheid political movement, for ending segregation and introducing majority rule. In 1990, prominent ANC figures such as Nelson Mandela were released from prison. Apartheid legislation was repealed on 17 June 1991, leading to multiracial elections in April 1994.