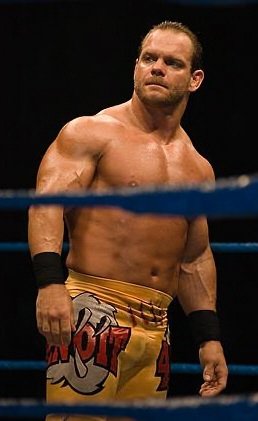 Utilizing the nicknames The (Canadian) Crippler alongside The Rabid Wolverine throughout his career, Benoit held 22 championships between WWF/WWE, WCW, NJPW, and ECW. He was a two-time world champion, having been a one-time WCW World Heavyweight Champion, and a one-time World Heavyweight Champion in WWE; he was booked to win a third world championship at a WWE event on the night of his death. Benoit was the twelfth WWE Triple Crown Champion and seventh WCW Triple Crown Champion, and the second of four men in history to achieve both the WWE and WCW Triple Crown Championships. He was also the 2004 Royal Rumble winner, joining Shawn Michaels and preceding Edge as one of three men to win a Royal Rumble as the number one entrant. Benoit headlined multiple pay-per-views for WWE, including a victory in the World Heavyweight Championship main event match of WrestleMania XX in March 2004.In a suspected double-murder and suicide, local law enforcement officials concluded "based on evidence found within the [Benoit family] home", that Benoit had murdered his wife in their residence on June 22, 2007, had killed his 7-year-old son on June 23, and on June 24, had committed suicide, reportedly hanging himself using equipment in a weight-training area inside the residency basement. Later research undertaken by the Sports Legacy Institute (now the Concussion Legacy Foundation) suggested that depression and CTE (chronic traumatic encephalopathy), a condition of brain damage, from numerous concussions Benoit had sustained during his professional wrestling career were both likely contributing factors of the tragedy.Due to his suspected murders, Benoit's legacy in the professional wrestling industry has remained incredibly controversial and heavily debated. In spite of his assumed crimes, Benoit has been universally renowned by many for his exceptional technical wrestling ability. Prominent combat sports journalist Dave Meltzer considers Benoit "one of the top 10, maybe even the top five, all-time greats" in pro-wrestling history.Benoit was inducted into the Stampede Wrestling Hall of Fame in 1995 and the Wrestling Observer Newsletter Hall of Fame in 2003. Benoits WON induction was put to a referendum-style re-vote for WON readers in 2008, a year after the tragedy, to determine if Benoit should remain a member of the WON Hall of Fame, or be removed. Ultimately, the threshold percentage of votes required to remove Benoit set by WON staff was not met, and so Benoit still remains in that Hall of Fame.