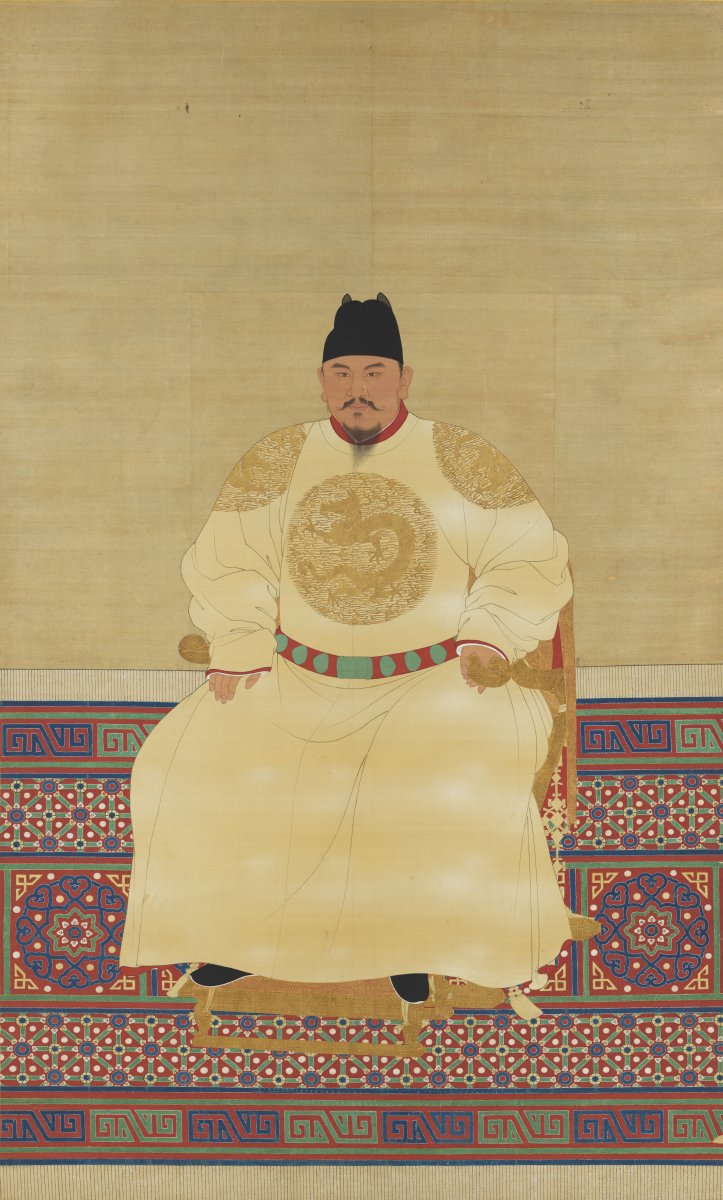 Hongwu Emperor of China (b. 1328)
The Hongwu Emperor (21 October 1328 – 24 June 1398), personal name Zhu Yuanzhang (Chinese: 朱元璋; Wade–Giles: Chu Yuan-chang), courtesy name Guorui (simplified Chinese: 国瑞; traditional Chinese: 國瑞), was the founding emperor of the Ming dynasty, reigning from 1368 to 1398.As famine, plagues and peasant revolts increased across China in the 14th century, Zhu Yuanzhang rose to command the forces that conquered China, ending the Mongol-led Yuan dynasty and forcing the Mongols to retreat to the Eurasian Steppe. Zhu claimed the Mandate of Heaven and established the Ming dynasty at the beginning of 1368 and occupied the Yuan capital, Khanbaliq (present-day Beijing), with his army that same year. Trusting only his family, he made his many sons feudal princes along the northern marches and the Yangtze valley. Having outlived his eldest son Zhu Biao, Zhu enthroned Zhu Biao's son via a series of instructions. This ended in failure when the Jianwen Emperor's attempts to unseat his uncles led to the Jingnan Rebellion.The era of Hongwu was noted for its tolerance of minorities and religions; Ma Zhou, the Chinese historian indicates that the Hongwu ordered the renovation and construction of many mosques in Xi’an and Nanjing. Wang Daiyu also recorded that the emperor wrote 100 characters praising Islam, Baizi zan.The reign of the Hongwu Emperor is notable for his unprecedented political reforms. The emperor abolished the position of chancellor, drastically reduced the role of court eunuchs, and adopted draconian measures to address corruption. He also established the Embroidered Uniform Guard, one of the best known secret police organizations in imperial China. In the 1380s and 1390s a series of purges were launched to eliminate his high-ranked officials and generals; tens of thousands were executed. The reign of Hongwu also witnessed much cruelty. Various cruel methods of execution was introduced for punishable crimes and for those who directly criticized the emperor, and massacres were also carried out against everyone who resisted his rule.The emperor encouraged agriculture, reduced taxes, incentivized the cultivation of new land, and established laws protecting peasants' property. He also confiscated land held by large estates and forbade private slavery. At the same time, he banned free movement in the empire and assigned hereditary occupational categories to households. Through these measures, Zhu Yuanzhang attempted to rebuild a country that had been ravaged by war, limit and control its social groups, and instill orthodox values in his subjects, eventually creating a strictly regimented society of self-sufficient farming communities.