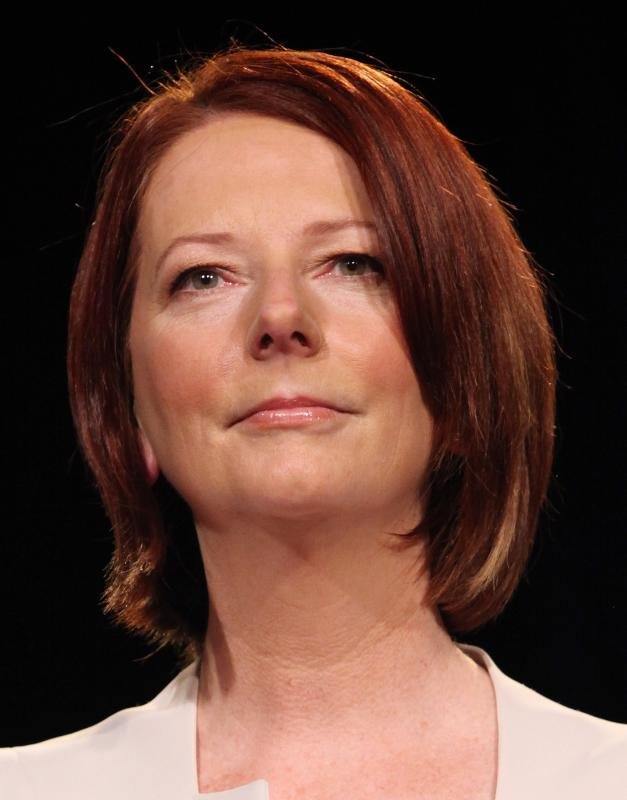 Julia Eileen Gillard (born 29 September 1961) is an Australian former politician who served as the 27th prime minister of Australia from 2010 to 2013. She held office as leader of the Australian Labor Party (ALP). She is the only female prime minister in Australian history.

Born in Barry, Wales, Gillard migrated with her family to Adelaide in South Australia in 1966. She attended Mitcham Demonstration School and Unley High School. Gillard went on to study at the University of Adelaide, but switched to the University of Melbourne in 1982, where she graduated with a Bachelor of Laws in 1986 and a Bachelor of Arts in 1989. During this time, she was president of the Australian Union of Students from 1983 to 1984. In 1987, Gillard joined the law firm Slater & Gordon, eventually becoming a partner in 1990, specialising in industrial law. In 1996, she became chief of staff to John Brumby, the Leader of the Opposition in Victoria.

Gillard was first elected to the House of Representatives at the 1998 election for the seat of Lalor. Following the 2001 election, she was appointed to the Shadow Cabinet. In December 2006, Gillard became the running mate of Kevin Rudd in a successful leadership challenge to Kim Beazley, becoming deputy leader of the opposition. After Labor's victory at the 2007 election, she was appointed as the deputy prime minister of Australia, and was also given the roles of Minister for Education, Minister for Employment and Workplace Relations, and Minister for Social Inclusion.

On 24 June 2010, after Rudd lost internal support within the Labor Party and resigned as leader, Gillard was elected unopposed as his replacement in a leadership spill, and was sworn-in as prime minister. She led Labor through the 2010 election weeks later, which saw the first hung parliament since 1940. Gillard was able to form a minority government with the support of a Green MP and three independents. The Gillard Government introduced the National Disability Insurance Scheme, introduced Gonski funding for Australian education, implemented carbon pricing in Australia, and oversaw the National Broadband Network (NBN). On 26 June 2013, after a lengthy period of leadership instability, Gillard lost the leadership of the Labor Party back to Rudd at a leadership spill. Her resignation as prime minister took effect the next day, and she announced her retirement from politics.

In the years following her retirement, Gillard has been a visiting professor at the University of Adelaide, the Senior Fellow at the Brookings Institution's Center for Universal Education, and has served as the chair of the Global Partnership for Education since 2014 and as the chair of Beyond Blue since 2017. She released her memoir, My Story, in September 2014. In April 2021, she became chair of the Wellcome Trust, succeeding Eliza Manningham-Buller.Although Gillard often ranked poorly in opinion polls as prime minister, her premiership has been more favourably received in retrospect. Political experts often place her in the middle-to-upper tier of Australian prime ministers.