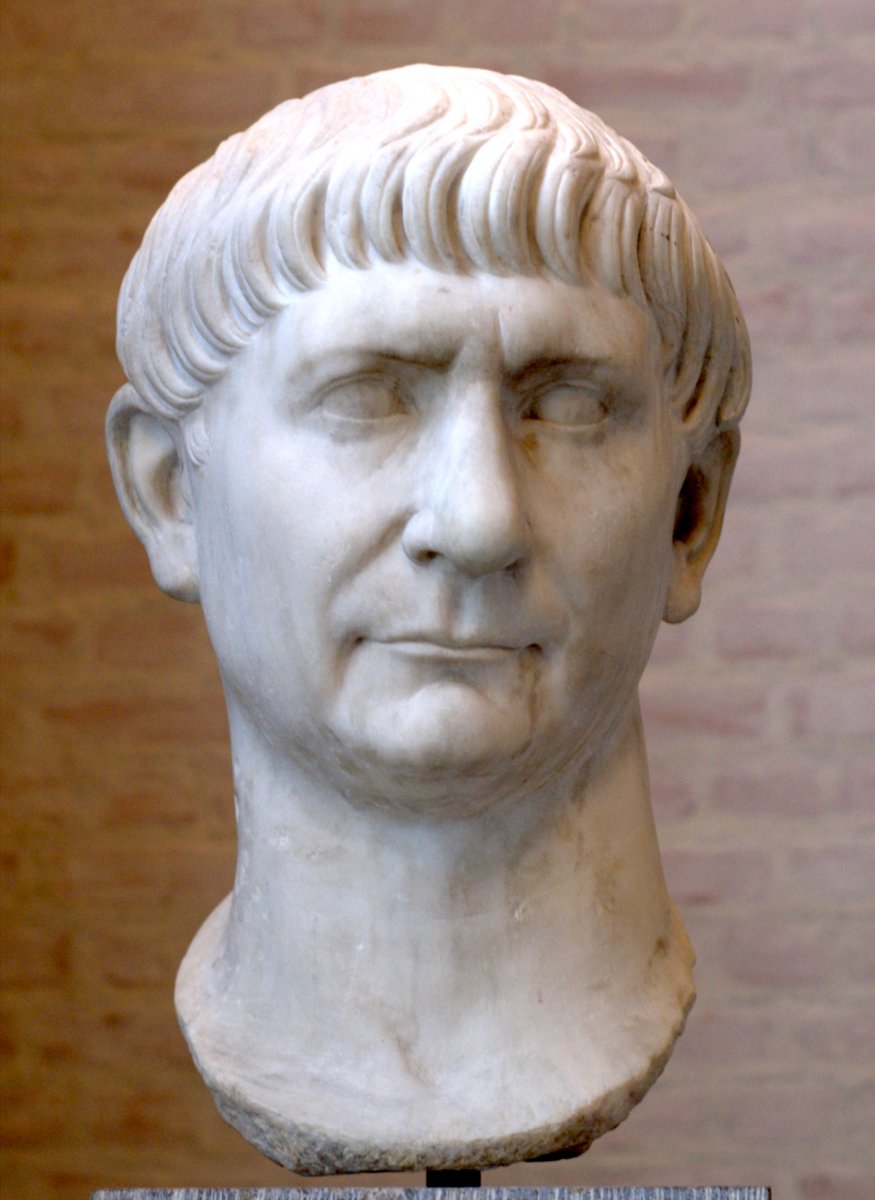 The Aqua Traiana (later rebuilt and named the Acqua Paola) was a 1st-century Roman aqueduct built by Emperor Trajan and inaugurated on 24 June 109 AD. It channelled water from sources around Lake Bracciano, 40 kilometers (25 mi) north-west of Rome, to Rome in ancient Roman times but had fallen into disuse by the 17th century. It fed a number of water mills on the Janiculum, including a sophisticated mill complex revealed by excavations in the 1990s under the present American Academy in Rome. Some of the Janiculum mills were famously put out of action by the Ostrogoths when they cut the aqueduct in 537 during the first siege of Rome. Belisarius restored the supply of grain by using mills floating in the Tiber. The complex of mills bears parallels with a similar complex at Barbegal in southern Gaul.

Trajan ( TRAY-jən; Latin: Caesar Nerva Traianus; 18 September 53 – 9/11 August 117) was Roman emperor from 98 to 117. Officially declared by the Senate optimus princeps ("best ruler"), Trajan is remembered as a successful soldier-emperor who presided over the greatest military expansion in Roman history, leading the empire to attain its maximum territorial extent by the time of his death. He is also known for his philanthropic rule, overseeing extensive public building programs and implementing social welfare policies, which earned him his enduring reputation as the second of the Five Good Emperors who presided over an era of peace within the Empire and prosperity in the Mediterranean world.

Trajan was born in Italica, close to modern Seville in present-day Spain, an Italic settlement in the Roman province of Hispania Baetica. Although misleadingly designated by some later writers as a provincial, his Ulpia gens came from Umbria and he was born in the senatorial family. Trajan rose to prominence during the reign of emperor Domitian. Serving as a legatus legionis in Hispania Tarraconensis, in 89 Trajan supported Domitian against a revolt on the Rhine led by Antonius Saturninus. In September 96, Domitian was succeeded by the old and childless Nerva, who proved to be unpopular with the army. After a brief and tumultuous year in power, culminating in a revolt by members of the Praetorian Guard, he decided to adopt the more popular Trajan as his heir and successor. Nerva died in 98 and was succeeded by his adopted son without incident.

As a civilian administrator, Trajan is best known for his extensive public building program, which reshaped the city of Rome and left numerous enduring landmarks such as Trajan's Forum, Trajan's Market and Trajan's Column.

Early in his reign, he annexed the Nabataean Kingdom, creating the province of Arabia Petraea. His conquest of Dacia enriched the empire greatly, as the new province possessed many valuable gold mines. Trajan's war against the Parthian Empire ended with the sack of the capital Ctesiphon and the annexation of Armenia, Mesopotamia and (possibly) Assyria. In late 117, while sailing back to Rome, Trajan fell ill and died of a stroke in the city of Selinus. He was deified by the Senate and his ashes were laid to rest under Trajan's Column. He was succeeded by his cousin Hadrian, whom Trajan supposedly adopted on his deathbed.