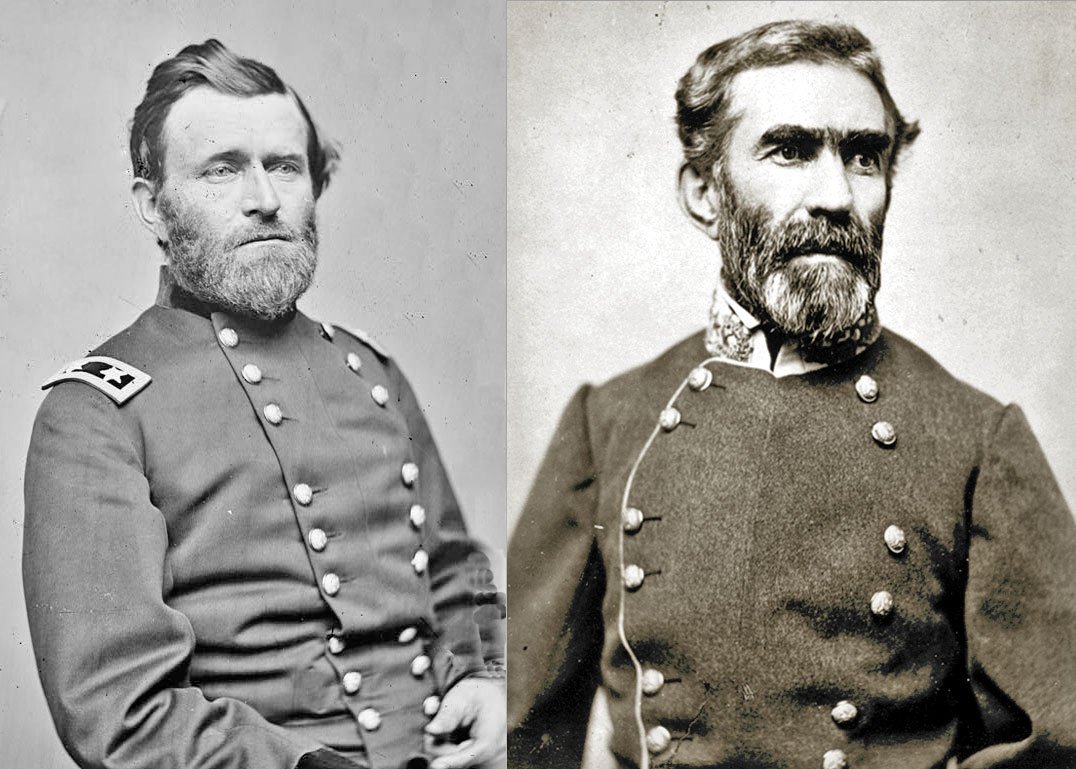 The Chattanooga campaign was a series of maneuvers and battles in October and November 1863, during the American Civil War. Following the defeat of Maj. Gen. William S. Rosecrans's Union Army of the Cumberland at the Battle of Chickamauga in September, the Confederate Army of Tennessee under Gen. Braxton Bragg besieged Rosecrans and his men by occupying key high terrain around Chattanooga, Tennessee. Maj. Gen. Ulysses S. Grant was given command of Union forces in the West, now consolidated under the Division of the Mississippi. Significant reinforcements also began to arrive with him in Chattanooga from Mississippi and the Eastern Theater. On October 18, Grant removed Rosecrans from command of the Army of the Cumberland and replaced him with Major General George Henry Thomas.

During the opening of a supply line (the "Cracker Line") to feed the starving men and animals in Chattanooga, a force under Maj. Gen. Joseph Hooker fought off a Confederate counterattack at the Battle of Wauhatchie on October 2829, 1863. On November 23, the Army of the Cumberland advanced from the fortifications around Chattanooga to seize the strategic high ground at Orchard Knob while elements of the Union Army of the Tennessee under Maj. Gen. William Tecumseh Sherman maneuvered to launch a surprise attack against Bragg's right flank on Missionary Ridge. On November 24, Sherman's men crossed the Tennessee River in the morning and then advanced to occupy high ground at the northern end of Missionary Ridge in the afternoon. The same day, a mixed force of almost three divisions under Maj. Gen. Joseph Hooker defeated the Confederates in the Battle of Lookout Mountain. The next day they began a movement toward Bragg's left flank at Rossville.

On November 25, Sherman's attack on Bragg's right flank made little progress. Hoping to distract Bragg's attention, Grant ordered Thomas's army to advance in the center and take the Confederate positions at the base of Missionary Ridge. The untenability of these newly captured entrenchments caused Thomas's men to surge to the top of Missionary Ridge and, with the help of Hooker's force advancing north from Rossville, routed the Army of Tennessee. The Confederates retreated to Dalton, Georgia, successfully fighting off the Union pursuit at the Battle of Ringgold Gap. Bragg's defeat eliminated the last significant Confederate control of Tennessee and opened the door to an invasion of the Deep South, leading to Sherman's Atlanta campaign of 1864. 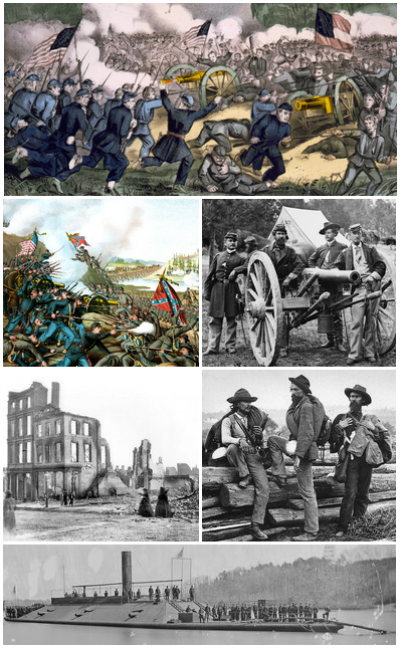 The American Civil War (April 12, 1861 – May 9, 1865; also known by other names) was a civil war in the United States between the Union (states that remained loyal to the federal union, or "the North") and the Confederacy (states that voted to secede, or "the South"). The central cause of the war was the status of slavery, especially the expansion of slavery into territories acquired as a result of the Louisiana Purchase and the Mexican–American War. On the eve of the Civil War in 1860, four million of the 32 million Americans (~13%) were enslaved black people, almost all in the South.The practice of slavery in the United States was one of the key political issues of the 19th century. Decades of political unrest over slavery led up to the Civil War. Disunion came after Abraham Lincoln won the 1860 United States presidential election on an anti-slavery expansion platform. An initial seven southern slave states declared their secession from the country to form the Confederacy. Confederate forces seized federal forts within territory they claimed. The last-minute Crittenden Compromise tried to avert conflict but failed; both sides prepared for war. Fighting broke out in April 1861 when the Confederate army began the Battle of Fort Sumter in South Carolina, just over a month after the first inauguration of Abraham Lincoln. The Confederacy grew to control at least a majority of territory in eleven states (out of the 34 U.S. states in February 1861), and asserted claims to two more. Both sides raised large volunteer and conscription armies. Four years of intense combat, mostly in the South, ensued.

During 1861–1862 in the war's Western Theater, the Union made significant permanent gains—though in the war's Eastern Theater the conflict was inconclusive. On January 1, 1863, Lincoln issued the Emancipation Proclamation, which made ending slavery a war goal, declaring all persons held as slaves in states in rebellion "forever free." To the west, the Union destroyed the Confederate river navy by the summer of 1862, then much of its western armies, and seized New Orleans. The successful 1863 Union siege of Vicksburg split the Confederacy in two at the Mississippi River. In 1863, Confederate General Robert E. Lee's incursion north ended at the Battle of Gettysburg. Western successes led to General Ulysses S. Grant's command of all Union armies in 1864. Inflicting an ever-tightening naval blockade of Confederate ports, the Union marshaled resources and manpower to attack the Confederacy from all directions. This led to the fall of Atlanta in 1864 to Union General William Tecumseh Sherman and his march to the sea. The last significant battles raged around the ten-month Siege of Petersburg, gateway to the Confederate capital of Richmond.

The Civil War effectively ended on April 9, 1865, when Confederate General Lee surrendered to Union General Grant at the Battle of Appomattox Court House, after Lee had abandoned Petersburg and Richmond. Confederate generals throughout the Confederate army followed suit. The conclusion of the American Civil War lacks a clean end date: land forces continued surrendering until June 23. By the end of the war, much of the South's infrastructure was destroyed, especially its railroads. The Confederacy collapsed, slavery was abolished, and four million enslaved black people were freed. The war-torn nation then entered the Reconstruction era in a partially successful attempt to rebuild the country and grant civil rights to freed slaves.

The Civil War is one of the most studied and written about episodes in the history of the United States. It remains the subject of cultural and historiographical debate. Of particular interest is the persisting myth of the Lost Cause of the Confederacy. The American Civil War was among the earliest to use industrial warfare. Railroads, the telegraph, steamships, the ironclad warship, and mass-produced weapons saw wide use. In total the war left between 620,000 and 750,000 soldiers dead, along with an undetermined number of civilian casualties. President Lincoln was assassinated just five days after Lee's surrender. The Civil War remains the deadliest military conflict in American history. The technology and brutality of the Civil War foreshadowed the coming World Wars.