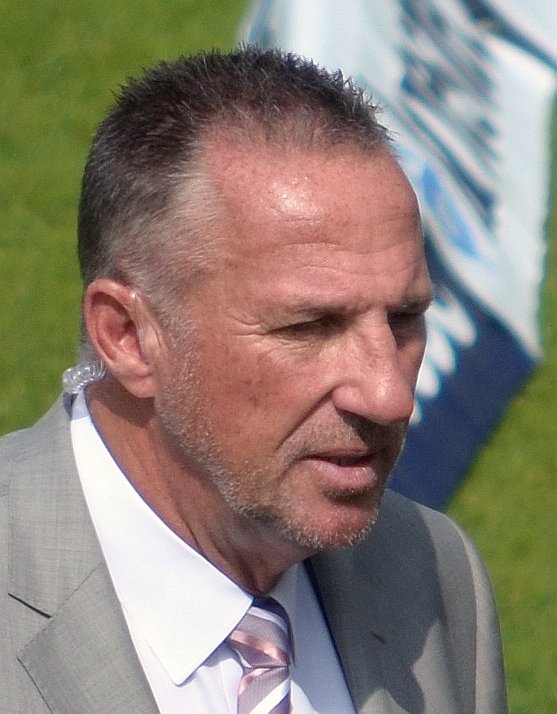 Ian Botham, English cricketer, footballer, and sportscaster
Ian Terence Botham, Baron Botham, (born 24 November 1955) is an English cricket commentator, member of the House of Lords and a former cricketer who has been chairman of Durham County Cricket Club since 2017.

Hailed as one of the greatest all-rounders in the history of the game, Botham represented England in both Test and One-Day International cricket. He played most of his first-class cricket for Somerset, at other times competing for Worcestershire, Durham and Queensland. He was an aggressive right-handed batsman and, as a right-arm fast-medium bowler, was noted for his swing bowling. He generally fielded close to the wicket, predominantly in the slips. In Test cricket, Botham scored 14 centuries with a highest score of 208, and from 1986 to 1988 held the world record for the most Test wickets until overtaken by fellow all-rounder Sir Richard Hadlee. He took five wickets in an innings 27 times, and 10 wickets in a match four times. In 1980, he became the second player in Test history to complete the "match double" of scoring 100 runs and taking 10 wickets in the same match. On the occasion of England's 1000th Test in August 2018, he was named in the country's greatest Test XI by the ECB.Botham has at times been involved in controversies, including a highly publicised court case involving rival all-rounder Imran Khan and an ongoing dispute with the Royal Society for the Protection of Birds (RSPB). These incidents, allied to his on-field success, have attracted media attention, especially from the tabloid press. Botham has used his fame to raise money for research into childhood leukaemia. These efforts have realised millions of pounds for Bloodwise, of which he became president. On 8 August 2009, he was inducted into the ICC Cricket Hall of Fame. In July 2020, it was announced that Botham would be elevated to the House of Lords and that he would sit as a crossbench peer.Botham has a wide range of sporting interests outside cricket. He was a talented footballer at school and had to choose between cricket and football as a career. He chose cricket but, even so, he played professional football for a few seasons and made eleven appearances in the Football League for Scunthorpe United, becoming the club's president in 2017. He is a keen golfer, and his other pastimes include angling and shooting. He has been awarded both a knighthood and a life peerage.