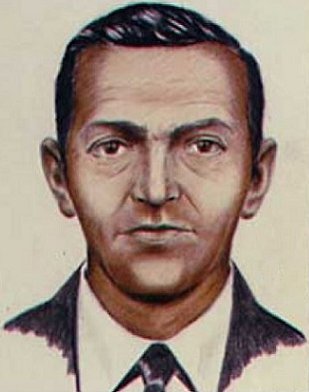 During a severe thunderstorm over Washington state, a hijacker calling himself Dan Cooper (aka D. B. Cooper) parachutes from a Northwest Orient Airlines plane with $200,000 in ransom money. He has never been found.

D. B. Cooper is a media epithet for an unidentified man who hijacked Northwest Orient Airlines Flight 305, a Boeing 727 aircraft operated by Northwest Orient Airlines, in United States airspace on November 24, 1971. During the flight from Portland, Oregon, to Seattle, Washington, the hijacker told a flight attendant he was armed with a bomb, demanded $200,000 in ransom, (equivalent to $1,338,000 in 2021) and requested four parachutes upon landing in Seattle. After releasing the passengers in Seattle, the hijacker instructed the flight crew to refuel the aircraft and begin a second flight to Mexico City, with a refueling stop in Reno, Nevada. Approximately thirty minutes after taking off from Seattle, the hijacker opened the aircraft's aft door, deployed the staircase, and parachuted into the night over southwestern Washington. The hijacker was never identified, apprehended, or found.

In 1980, a small portion of the ransom money was found along the banks of the Columbia River. The discovery of the money renewed public interest in the mystery but yielded no additional information about the hijacker's identity or fate, and the remaining money was never recovered. The hijacker identified himself as Dan Cooper but, because of a reporter's mistake, became known as "D. B. Cooper".

For 45 years after the hijacking, the Federal Bureau of Investigation (FBI) maintained an active investigation and built an extensive case file, but ultimately did not reach any definitive conclusions and the crime remains the only unsolved case of air piracy in the history of commercial aviation. The FBI speculates Cooper did not survive his jump, for several reasons: the inclement weather on the night of the hijacking; Cooper's lack of proper skydiving equipment; his drop zone was a heavily wooded area; Cooper's apparent lack of detailed knowledge of his landing area; and the disappearance of the remaining ransom money, suggesting it was never spent. In July 2016, the FBI officially suspended active investigation of the NORJAK (Northwest Hijacking) case, although reporters, enthusiasts, professional investigators, and amateur sleuths continue to pursue numerous theories for Cooper's identity, success, and fate.

Cooper's hijackingand several imitators in the following yearled to immediate and major changes for commercial aviation and stricter airport security measures. Metal detectors were installed, baggage inspection became mandatory, and passengers who paid cash for tickets on the day of departure were selected for additional scrutiny. 727s were retrofitted with eponymous "Cooper Vanes," specifically designed to prevent the aft staircase from being lowered in-flight. By 1973, aircraft hijacking incidents had decreased as the new security measures successfully dissuaded would-be hijackers whose only motive was money. 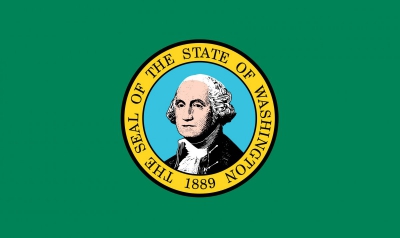 Washington ( (listen)), officially the State of Washington, is a state in the Pacific Northwest region of the Western United States. Named for George Washington—the first U.S. president—the state was formed from the western part of the Washington Territory, which was ceded by the British Empire in 1846, in accordance with the Oregon Treaty in the settlement of the Oregon boundary dispute. The state, which is bordered on the west by the Pacific Ocean, Oregon to the south, Idaho to the east, and the Canadian province of British Columbia to the north—was admitted to the Union as the 42nd state in 1889. Olympia is the state capital; the state's largest city is Seattle. Washington is often referred to as Washington state to distinguish it from the nation's capital, Washington, D.C.Washington is the 18th-largest state, with an area of 71,362 square miles (184,830 km2), and the 13th-most populous state, with more than 7.7 million people. The majority of Washington's residents live in the Seattle metropolitan area, the center of transportation, business, and industry on Puget Sound, an inlet of the Pacific Ocean consisting of numerous islands, deep fjords, and bays carved out by glaciers. The remainder of the state consists of deep temperate rainforests in the west; mountain ranges in the west, central, northeast, and far southeast; and a semi-arid basin region in the east, central, and south, given over to intensive agriculture. Washington is the second most populous state on the West Coast and in the Western United States, after California. Mount Rainier, an active stratovolcano, is the state's highest elevation at 14,411 feet (4,392 meters), and is the most topographically prominent mountain in the contiguous U.S.

Washington is a leading lumber producer; its rugged surface is rich in stands of Douglas fir, hemlock, ponderosa pine, white pine, spruce, larch, and cedar. The state is the largest producer of apples, hops, pears, blueberries, spearmint oil, and sweet cherries in the U.S., and ranks high in the production of apricots, asparagus, dry edible peas, grapes, lentils, peppermint oil, and potatoes. Livestock, livestock products, and commercial fishing—particularly of salmon, halibut, and bottomfish—are also significant contributors to the state's economy. Washington ranks second only to California in wine production.

Manufacturing industries in Washington include aircraft, missiles, shipbuilding, and other transportation equipment, food processing, metals and metal products, chemicals, and machinery. Washington has more than a thousand dams, including the Grand Coulee Dam, built for a variety of purposes including irrigation, electricity generation, flood control, and water storage.

Washington is one of the wealthiest as well as most socially liberal states in the country. The state consistently ranks among the best for life expectancy and low unemployment. Along with Colorado, Washington was one of the first to legalize medicinal and recreational cannabis, was among the first states to legalize same-sex marriage in 2012, and was one of only four U.S. states to have been providing legal abortions on request before the 1973 Supreme Court decision in Roe v. Wade loosened abortion laws nationwide. Similarly, Washington voters approved a 2008 referendum on legalization of physician-assisted suicide, and Washington is currently one of ten states—along with Washington, D.C.—to have legalized the practice.