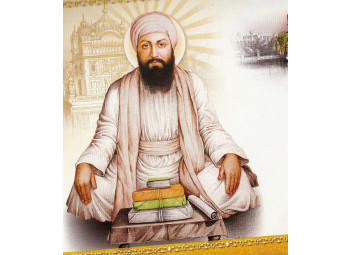 Guru Angad was the second Sikh Guru, leading the Sikh teachings after the death of Guru Nanak, the first Sikh Guru, in 1539. He was born in 1504 to a Hindu family, and was given the name Bhai Lenha. Prior to embracing the teachings of Sikhism, he worked as a religious teacher; promoting the preachment of goddess Durga, until he met the first guru and became a Sikh. Bhai Lenha was given the name Angad by Guru Nanak after many years of being his acolyte. Shortly after, Guru Nanak announced Guru Angad as his successor in delivering the messages of Sikhism, favoring him over his own sons.