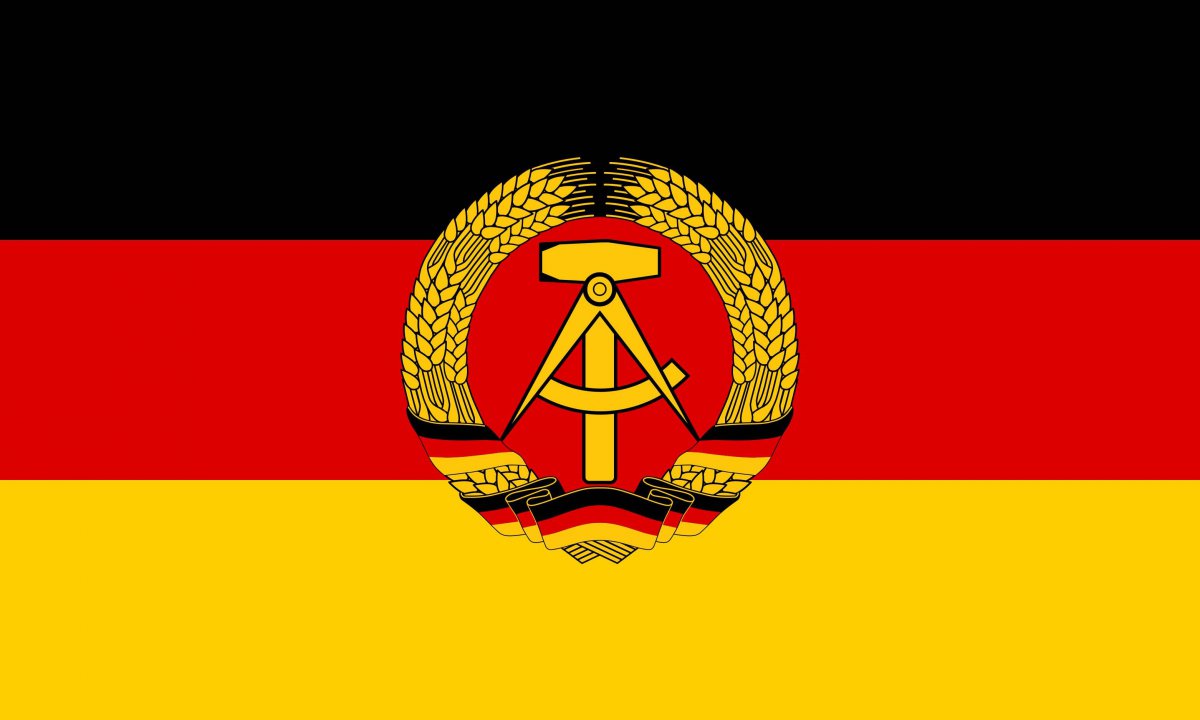 East Germany closes the border between the eastern and western sectors of Berlin to thwart its inhabitants' attempts to escape to the West, and construction of the Berlin Wall is started.[2]

The Berlin Wall (German: Berliner Mauer, pronounced [blin ma] (listen)) was a guarded concrete barrier that physically and ideologically divided Berlin from 1961 to 1989 as well as encircling and separating West Berlin from East German territory. Construction of the wall was commenced by the German Democratic Republic (GDR, East Germany) on 13 August 1961. The Wall cut off West Berlin from surrounding East Germany, including East Berlin. The barrier included guard towers placed along large concrete walls, accompanied by a wide area (later known as the "death strip") that contained anti-vehicle trenches, beds of nails and other defenses. The Eastern Bloc portrayed the Wall as protecting its population from fascist elements conspiring to prevent the "will of the people" from building a socialist state in East Germany.

GDR authorities officially referred to the Berlin Wall as the Anti-Fascist Protection Rampart (German: Antifaschistischer Schutzwall). The West Berlin city government sometimes referred to it as the "Wall of Shame", a term coined by mayor Willy Brandt in reference to the Wall's restriction on freedom of movement. Along with the separate and much longer Inner German border (IGB), which demarcated the border between East and West Germany, it came to symbolize physically the "Iron Curtain" that separated Western Europe and the Eastern Bloc during the Cold War.Before the Wall's erection, 3.5 million East Germans circumvented Eastern Bloc emigration restrictions and defected from the GDR, many by crossing over the border from East Berlin into West Berlin; from there they could then travel to West Germany and to other Western European countries. Between 1961 and 1989, the Wall prevented almost all such emigration. During this period, over 100,000 people attempted to escape, and over 5,000 people succeeded in escaping over the Wall, with an estimated death toll ranging from 136 to more than 200 in and around Berlin.

In 1989, a series of revolutions in nearby Eastern Bloc countriesin Poland and Hungary in particularcaused a chain reaction in East Germany. In particular, the Pan-European Picnic in August 1989 set in motion a peaceful development during which the Iron Curtain largely broke, the rulers in the East came under pressure, the Berlin Wall fell and finally the Eastern Bloc fell apart. After several weeks of civil unrest, the East German government announced on 9 November 1989 that all GDR citizens could visit West Germany and West Berlin. Crowds of East Germans crossed and climbed onto the Wall, joined by West Germans on the other side in a celebratory atmosphere. Over the next few weeks, the likes of souvenir hunters chipped away parts of the Wall. The Brandenburg Gate, a few meters from the Berlin Wall, was opened on 22 December 1989. The demolition of the Wall officially began on 13 June 1990 and was completed in 1994. The "fall of the Berlin Wall" paved the way for German reunification, which formally took place on 3 October 1990.

East Germany, officially the German Democratic Republic (GDR; German: Deutsche Demokratische Republik, pronounced [ˈdɔʏtʃə demoˈkʁaːtɪʃə ʁepuˈbliːk] (listen), DDR, pronounced [ˌdeːdeːˈʔɛɐ̯] (listen)), was a state that existed from 1949 to 1990 in eastern Germany as part of the Eastern Bloc in the Cold War. Commonly described as a communist state, it described itself as a socialist "workers' and peasants' state". Its territory was administered and occupied by Soviet forces following the end of World War II—the Soviet occupation zone of the Potsdam Agreement, bounded on the east by the Oder-Neisse line. The Soviet zone surrounded West Berlin but did not include it and West Berlin remained outside the jurisdiction of the GDR.

The GDR was established in the Soviet zone while the Federal Republic of Germany, commonly referred to as West Germany, was established in the three western zones. A satellite state of the Soviet Union, Soviet occupation authorities began transferring administrative responsibility to German communist leaders in 1948 and the GDR began to function as a state on 7 October 1949, although Soviet forces remained in the country throughout the Cold War. Until 1989, the GDR was governed by the Socialist Unity Party of Germany (SED), although other parties nominally participated in its alliance organization, the National Front of the German Democratic Republic. The SED made the teaching of Marxism–Leninism and the Russian language compulsory in schools.The economy was centrally planned and state-owned. Prices of housing, basic goods and services were heavily subsidized and set by central government planners rather than rising and falling through supply and demand. Although the GDR had to pay substantial war reparations to the Soviets, it became the most successful economy in the Eastern Bloc. Emigration to the West was a significant problem as many of the emigrants were well-educated young people and weakened the state economically. The government fortified its inner German border and built the Berlin Wall in 1961. Many people attempting to flee were killed by border guards or booby traps such as landmines. Those captured spent long periods of time imprisoned for attempting to escape. In 1951, a referendum in East Germany regarding the remilitarization of Germany was held, with 95% of the population voting in favour.In 1989, numerous social, economic and political forces in the GDR and abroad, one of the most notable being peaceful protests starting in the city of Leipzig, led to the fall of the Berlin Wall and the establishment of a government committed to liberalization. The following year, a free and fair election was held and international negotiations led to the signing of the Final Settlement treaty on the status and borders of Germany. The GDR dissolved itself and reunified with West Germany on 3 October 1990, with the former East German states reunified with the Federal Republic of Germany. Several of the GDR's leaders, notably its last communist leader Egon Krenz, were prosecuted by the Federal Republic after reunification for offenses committed during the Cold War.Geographically, the GDR bordered the Baltic Sea to the north, Poland to the east, Czechoslovakia to the southeast and West Germany to the southwest and west. Internally, the GDR also bordered the Soviet sector of Allied-occupied Berlin, known as East Berlin, which was also administered as the state's de facto capital. It also bordered the three sectors occupied by the United States, United Kingdom and France known collectively as West Berlin. The three sectors occupied by the Western nations were sealed off from the GDR by the Berlin Wall from its construction in 1961 until it was brought down in 1989.