Invasion of Iraq: A group of people leave London, England, for Baghdad, Iraq, to serve as human shields, intending to prevent the U.S.-led coalition troops from bombing certain locations.

The Human Shield Action to Iraq was a group of people who traveled to Iraq to act as human shields with the aim of preventing the U.S.-led coalition forces from bombing certain locations during the 2003 invasion of Iraq. 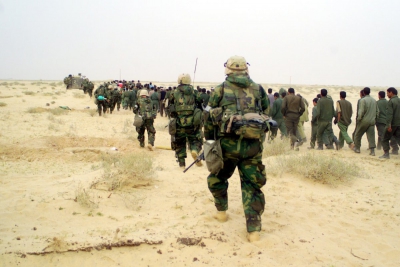 The 2003 invasion of Iraq was the first stage of the Iraq War. The invasion phase began on 19 March 2003 (air) and 20 March 2003 (ground) and lasted just over one month, including 26 days of major combat operations, in which a combined force of troops from the United States, the United Kingdom, Australia and Poland invaded Iraq. 22 days after the first day of the invasion, the capital city of Baghdad was captured by Coalition forces on 9 April 2003 after the six day long Battle of Baghdad. This early stage of the war formally ended on 1 May 2003 when U.S. President George W. Bush declared the "end of major combat operations" in his Mission Accomplished speech, after which the Coalition Provisional Authority (CPA) was established as the first of several successive transitional governments leading up to the first Iraqi parliamentary election in January 2005. U.S. military forces later remained in Iraq until the withdrawal in 2011.The U.S.-led coalition sent 160,000 troops into Iraq during the initial invasion phase, which lasted from 19 March to 1 May 2003. About 73% or 130,000 soldiers were American, with about 45,000 British soldiers (25%), 2,000 Australian soldiers (1%), and 194 Polish soldiers (0.1%). Thirty-six other countries were involved in its aftermath. In preparation for the invasion, 100,000 U.S. troops assembled in Kuwait by 18 February. The coalition forces also received support from the Peshmerga in Iraqi Kurdistan.

According to U.S. President George W. Bush and UK Prime Minister Tony Blair, the coalition aimed "to disarm Iraq of weapons of mass destruction, to end Saddam Hussein's support for terrorism, and to free the Iraqi people", even though a UN inspection team had declared it had found absolutely no evidence of the existence of WMDs just before the start of the invasion. Others place a much greater emphasis on the impact of the September 11 attacks, on the role this played in changing U.S. strategic calculations, and the rise of the freedom agenda. According to Blair, the trigger was Iraq's failure to take a "final opportunity" to disarm itself of alleged nuclear, chemical, and biological weapons that U.S. and British officials called an immediate and intolerable threat to world peace.In a January 2003 CBS poll, 64% of Americans had approved of military action against Iraq; however, 63% wanted Bush to find a diplomatic solution rather than go to war, and 62% believed the threat of terrorism directed against the U.S. would increase due to war. The invasion of Iraq was strongly opposed by some long-standing U.S. allies, including the governments of France, Canada, Germany, and New Zealand. Their leaders argued that there was no evidence of weapons of mass destruction in Iraq and that invading that country was not justified in the context of UNMOVIC's 12 February 2003 report. About 5,000 chemical warheads, shells or aviation bombs were discovered during the Iraq War, but these had been built and abandoned earlier in Saddam Hussein's rule before the 1991 Gulf War. The discoveries of these chemical weapons did not support the government's invasion rationale.On 15 February 2003, a month before the invasion, there were worldwide protests against the Iraq War, including a rally of three million people in Rome, which the Guinness Book of Records listed as the largest ever anti-war rally. According to the French academic Dominique Reynié, between 3 January and 12 April 2003, 36 million people across the globe took part in almost 3,000 protests against the Iraq war.The invasion was preceded by an airstrike on the Presidential Palace in Baghdad on 20 March 2003. The following day, coalition forces launched an incursion into Basra Province from their massing point close to the Iraqi-Kuwaiti border. While special forces launched an amphibious assault from the Persian Gulf to secure Basra and the surrounding petroleum fields, the main invasion army moved into southern Iraq, occupying the region and engaging in the Battle of Nasiriyah on 23 March. Massive air strikes across the country and against Iraqi command-and-control threw the defending army into chaos and prevented an effective resistance. On 26 March, the 173rd Airborne Brigade was airdropped near the northern city of Kirkuk, where they joined forces with Kurdish rebels and fought several actions against the Iraqi Army, to secure the northern part of the country.

The main body of coalition forces continued their drive into the heart of Iraq and met with little resistance. Most of the Iraqi military was quickly defeated and the coalition occupied Baghdad on 9 April. Other operations occurred against pockets of the Iraqi Army, including the capture and occupation of Kirkuk on 10 April, and the attack on and capture of Tikrit on 15 April. Iraqi president Saddam Hussein and the central leadership went into hiding as the coalition forces completed the occupation of the country. On 1 May President George W. Bush declared an end to major combat operations: this ended the invasion period and began the period of military occupation.