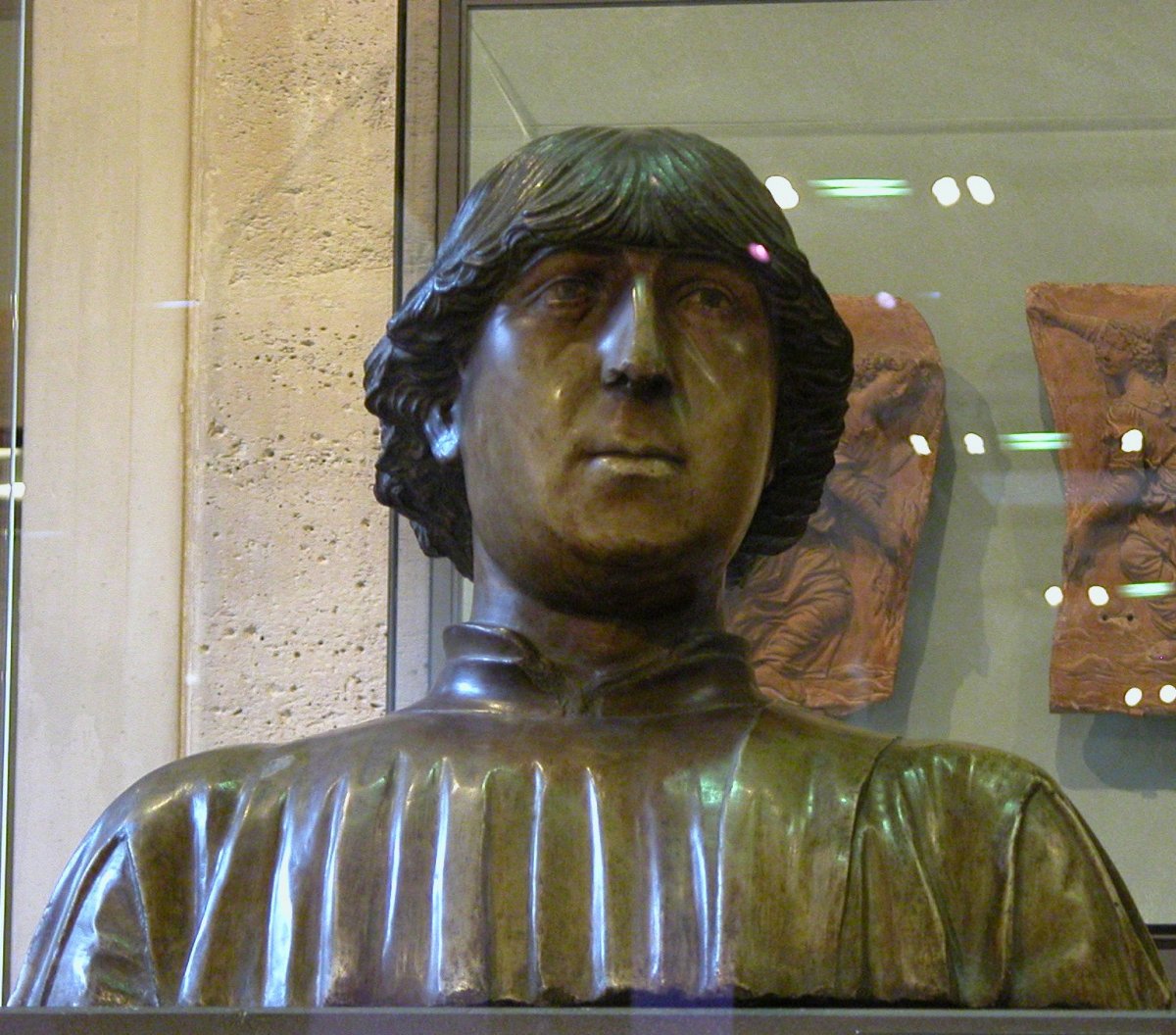 Ferdinand I of Naples

Ferdinand I of Naples (b. 1423)
Ferdinando Trastámara d'Aragona, of the Naples branch, universally known as Ferrante and also called by his contemporaries Don Ferrando and Don Ferrante (Valencia, 2 June 1424 – Naples, 25 January 1494), was the only son, illegitimate, of Alfonso I of Naples. He was king of Naples from 1458 to 1494.

He was one of the most influential and feared monarchs in Europe at the time and an important figure of the Italian Renaissance. In his thirty years of reign he brought peace and prosperity to Naples. Its foreign and diplomatic policy aimed at assuming the task of regulating the events of the peninsula in order not to disturb the political balance given by the Treaty of Lodi, to affirm the hegemony of the Kingdom of Naples over the other Italian states and to tighten through its diplomats and marriages of his numerous legitimate and natural children, a dense network of alliances and relationships with Italian and foreign sovereigns, earned him the fame and the nickname of Judge of Italy, in addition to being recognized as a generous patron.He issued various social laws that in fact undermined the excessive power of the Barons, favoring small artisans and peasants. This work of modernization and the resistance he put up against them led to the outbreak of the famous revolt which was subsequently suffocated.Ferrante was forced to prove his worth several times before obtaining the throne of Naples. Not only as governor, but also as a military man, as he was forced to recapture his own kingdom, against all conspirators, and during his rule, the kingdom was under constant attack from powers such as the Ottoman Empire, France, the Republic of Venice and the Papal States. It can be said that, in general, almost his entire life was spent in war.Recognized as one of the most powerful political minds of the time, Ferrante was gifted with great courage and remarkable political skills. Completely Italianized, he surrounded himself with numerous artists and humanists, completed the paternal building works in the city of Naples and erected new impressive buildings that still adorn it today.

The skills of Ferrante and his diplomats, skilled in weaving alliances in order to achieve Neapolitan hegemony in the system of Italian states, the fruits of the sovereign's economic strategy with the introduction of the art of silk and printing, politics of promotion and cultural attraction, the severe exercise of power also through the repression of the conspiracy of the barons led the Kingdom of Naples, with intellectuals of the caliber of Pontano, Panormita and others, to participate as a protagonist in Humanism and the Renaissance. At that time it possessed the most powerful navy in the western part of the Mediterranean.