Pope Pius XII elevates the Apostolic Vicariate of the Hawaiian Islands to the dignity of a diocese. It becomes the Roman Catholic Diocese of Honolulu.

The diocese is governed by the Bishop of Honolulu. His canonical seat or cathedra is located at the Cathedral Basilica of Our Lady of Peace. With his clergy, the bishop ministers to a culturally diverse population in the following languages: Hawaiian; English; Ilokano; Tagalog; Samoan; Tongan; Japanese; Korean; Spanish; and Vietnamese. It is one of the most diverse and one of the largest dioceses in the United States in terms of territorial area which spans statewide and includes unpopulated Hawaiian Islands. 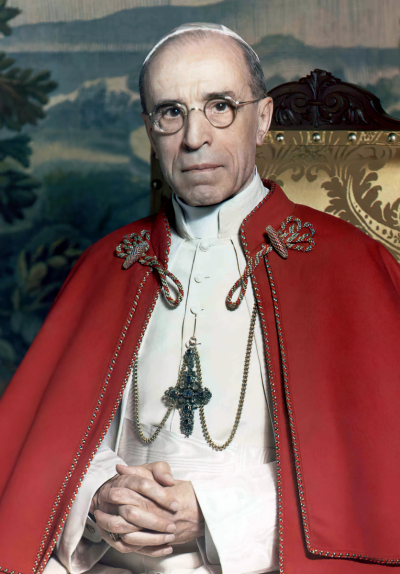 Pope Pius XII (Italian: Pio XII), born Eugenio Maria Giuseppe Giovanni Pacelli (Italian pronunciation: [euˈdʒɛːnjo maˈriːa dʒuˈzɛppe dʒoˈvanni paˈtʃɛlli]; 2 March 1876 – 9 October 1958), was head of the Catholic Church and sovereign of the Vatican City State from 2 March 1939 until his death in 1958. Before his election to the papacy, he served as secretary of the Department of Extraordinary Ecclesiastical Affairs, papal nuncio to Germany, and Cardinal Secretary of State, in which capacity he worked to conclude treaties with European and Latin American nations, such as the Reichskonkordat with the German Reich.While the Vatican was officially neutral during World War II, the Reichskonkordat and his leadership of the Catholic Church during the war remain the subject of controversy—including allegations of public silence and inaction about the fate of the Jews. Pius employed diplomacy to aid the victims of the Nazis during the war and, through directing the church to provide discreet aid to Jews and others, saved hundreds of thousands of lives. Pius maintained links to the German Resistance, and shared intelligence with the Allies. His strongest public condemnation of genocide was, however, considered inadequate by the Allied Powers, while the Nazis viewed him as an Allied sympathizer who had dishonoured his policy of Vatican neutrality. After the war, he advocated peace and reconciliation, including lenient policies towards former Axis and Axis-satellite nations.During his papacy, the Catholic Church issued the Decree against Communism, declaring that Catholics who profess Communist doctrine are to be excommunicated as apostates from the Christian faith. The church experienced severe persecution and mass deportations of Catholic clergy in the Eastern Bloc. He explicitly invoked ex cathedra papal infallibility with the dogma of the Assumption of Mary in his Apostolic constitution Munificentissimus Deus. His magisterium includes almost 1,000 addresses and radio broadcasts. His forty-one encyclicals include Mystici corporis, the Church as the Body of Christ; Mediator Dei on liturgy reform; and Humani generis, in which he instructed theologians to adhere to episcopal teaching and allowed that the human body might have evolved from earlier forms. He eliminated the Italian majority in the College of Cardinals in 1946.

After he died in 1958, Pope Pius XII was succeeded by John XXIII. In the process toward sainthood, his cause for canonization was opened on 18 November 1965 by Paul VI during the final session of the Second Vatican Council. He was made a Servant of God by John Paul II in 1990 and Benedict XVI declared Pius XII Venerable on 19 December 2009.