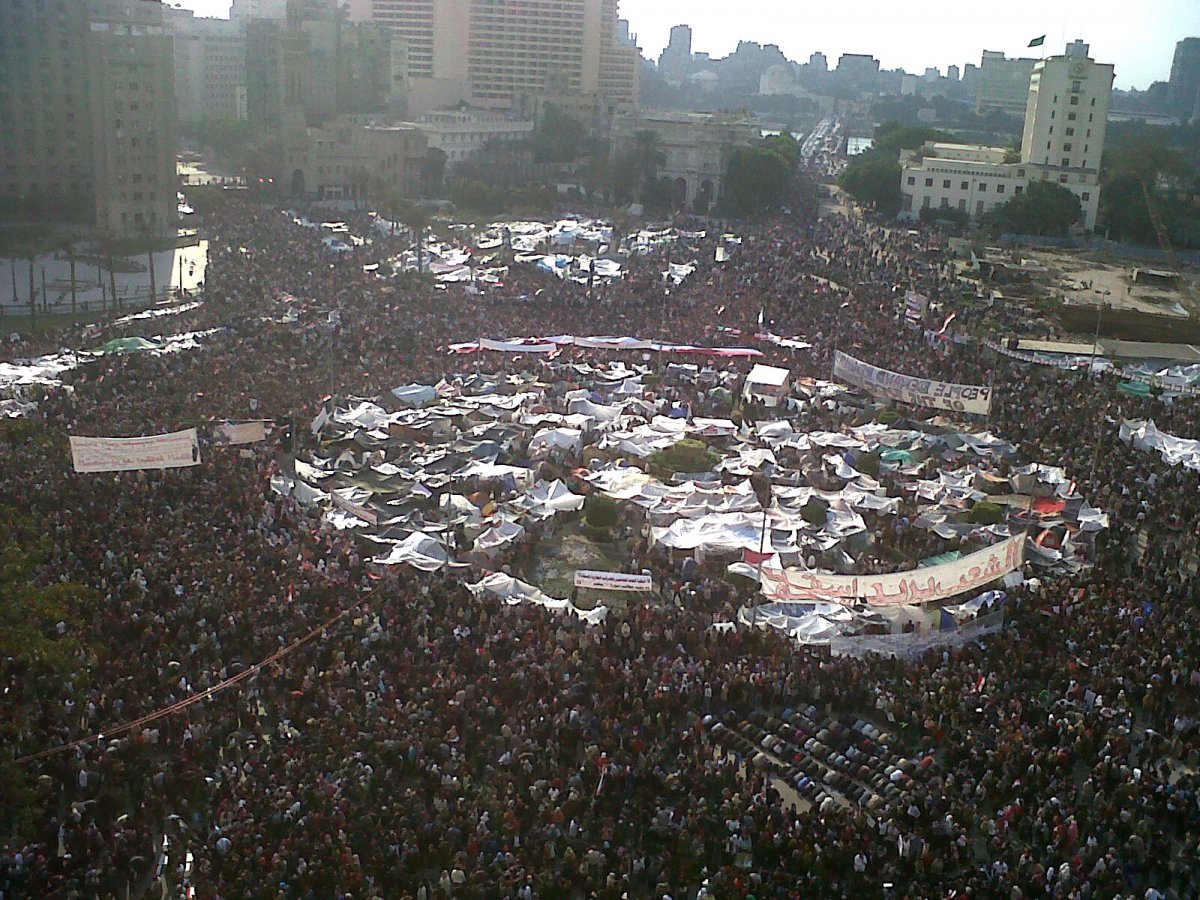 The first wave of the Egyptian revolution begins throughout the country, marked by street demonstrations, rallies, acts of civil disobedience, riots, labour strikes, and violent clashes.

The 2011 Egyptian revolution, also known as the 25 January revolution (Arabic: ; Thawrat khamsa wa-irn yanyir), began on 25 January 2011 and spread across Egypt. The date was set by various youth groups to coincide with the annual Egyptian "Police holiday" as a statement against increasing police brutality during the last few years of Hosni Mubarak's presidency. It consisted of demonstrations, marches, occupations of plazas, non-violent civil resistance, acts of civil disobedience and strikes. Millions of protesters from a range of socio-economic and religious backgrounds demanded the overthrow of Egyptian President Hosni Mubarak. Violent clashes between security forces and protesters resulted in at least 846 people killed and over 6,000 injured. Protesters retaliated by burning over 90 police stations across the country.The Egyptian protesters' grievances focused on legal and political issues, including police brutality, state-of-emergency laws, lack of political freedom, civil liberty, freedom of speech, corruption, high unemployment, food-price inflation and low wages. The protesters' primary demands were the end of the Mubarak regime. Strikes by labour unions added to the pressure on government officials. During the uprising, the capital, Cairo, was described as "a war zone" and the port city of Suez saw frequent violent clashes. Protesters defied a government-imposed curfew, which the police and military could not enforce in any case. Egypt's Central Security Forces, loyal to Mubarak, were gradually replaced by military troops. In the chaos, there was looting by rioters which was instigated (according to opposition sources) by plainclothes police officers. In response, watch groups were organized by civilian vigilantes to protect their neighborhoods.On 11 February 2011, Vice President Omar Suleiman announced that Mubarak resigned as president, turning power over to the Supreme Council of the Armed Forces (SCAF). The military junta, headed by effective head of state Mohamed Hussein Tantawi, announced on 13 February that the constitution is suspended, both houses of parliament dissolved and the military would govern for six months (until elections could be held). The previous cabinet, including Prime Minister Ahmed Shafik, would serve as a caretaker government until a new one was formed.After the revolution against Mubarak and a period of rule by the Supreme Council of the Armed Forces, the Muslim Brotherhood took power in Egypt through a series of popular elections, with Egyptians electing Islamist Mohamed Morsi to the presidency in June 2012, after winning the election over Ahmed Shafik. However, the Morsi government encountered fierce opposition after his attempt to pass an Islamic-leaning constitution. Morsi also issued a temporary presidential decree that raised his decisions over judicial review to enable the passing of the constitution. It sparked general outrage from secularists and members of the military, and mass protests broke out against his rule on 28 June 2013. On 3 July 2013, Morsi was deposed by a coup d'tat led by the minister of defense, General Abdel Fattah El-Sisi, as millions of Egyptians took to the streets in support of early elections. El-Sisi went on to become Egypt's president after an election in 2014 which was boycotted by opposition parties. 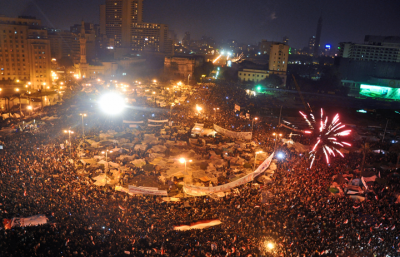 The following chronological summary of major events took place during the 2011 Egyptian revolution right up to Hosni Mubarak's resignation as the fourth President of Egypt on 11 February 2011.

From 1981 to 2011, Hosni Mubarak was in power under emergency law with his son Gamal appearing to be a likely successor for the presidency. In December 2010, protests in Tunisia sparked by the death of Mohamed Bouazizi turned into a revolution. The death of Khaled Saeed in June 2010 became a similar rallying point for activists in Egypt. Increasing use of social media among activists centered on plans for a nationwide protest on 25 January 2011.

Millions turned out in major cities across Egypt on the 25th, especially in Cairo's Tahrir Square. In the beginning, tensions were high between the police and protesters with violence breaking out in Suez and Alexandria. The government took a hard line, using riot-control tactics, and shutting down communications; But by the 28th the protests were continuing and the police had retreated. The security role was taken over by the military, and from then on the situation remained almost entirely peaceful. As pressure rose on Mubarak, the scale of the protests continued to grow, especially on specially organized Friday rallies.

Mubarak initially gave concessions, including the dissolution of parliament, agreeing to oversee a process of reform, and promising not to run for reelection in September 2011. The protesters, however, were not satisfied and by 8 February there were widespread calls for Mubarak's resignation. On the night of 10 February, Mubarak gave a speech in which it was expected he would step down. Anger erupted when he stated plans to merely delegate some of his power. By the next day, 11 February 2011, he had resigned.