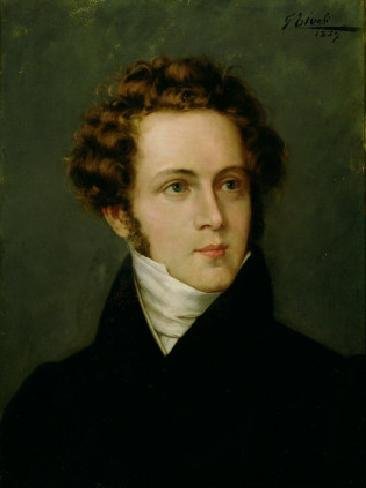 Vincenzo Bellini, Italian composer (b. 1801)
Vincenzo Salvatore Carmelo Francesco Bellini (Italian: [vinˈtʃɛntso salvaˈtoːre karˈmɛːlo franˈtʃesko belˈliːni] (listen); 3 November 1801 – 23 September 1835) was an Italian opera composer, who was known for his long-flowing melodic lines for which he was named "the Swan of Catania".

Many years later, in 1898, Giuseppe Verdi "praised the broad curves of Bellini's melody: 'there are extremely long melodies as no-one else had ever made before'."A large amount of what is known about Bellini's life and his activities comes from surviving letters—except for a short period—which were written over his lifetime to his friend Francesco Florimo, whom he had met as a fellow student in Naples and with whom he maintained a lifelong friendship. Other sources of information come from correspondence saved by other friends and business acquaintances.

Bellini was the quintessential composer of the Italian bel canto era of the early 19th century, and his work has been summed up by the London critic Tim Ashley as:

... also hugely influential, as much admired by other composers as he was by the public. Verdi raved about his "long, long, long melodies such as no one before had written." Wagner, who rarely liked anyone but himself, was spellbound by Bellini's almost uncanny ability to match music with text and psychology. Liszt and Chopin professed themselves fans. Of the 19th-century giants, only Berlioz demurred. Those musicologists who consider Bellini to be merely a melancholic tunesmith are now in the minority.

In considering which of his operas can be seen to be his greatest successes over the almost two hundred years since his death, Il pirata laid much of the groundwork in 1827, achieving very early recognition in comparison to Donizetti's having written thirty operas before his major 1830 triumph with Anna Bolena. Both I Capuleti e i Montecchi at La Fenice in 1830 and La sonnambula in Milan in 1831 reached new triumphal heights, although initially Norma, given at La Scala in 1831 did not fare as well until later performances elsewhere. "The genuine triumph" of I puritani in January 1835 in Paris capped a significant career. Certainly, Il pirata, Capuleti, La sonnambula, Norma, and I puritani are regularly performed today.After his initial success in Naples, most of the rest of his short life was spent outside of both Sicily and Naples, those years being followed with his living and composing in Milan and Northern Italy, and—after a visit to London—then came his final masterpiece in Paris, I puritani. Only nine months later, Bellini died in Puteaux, France at the age of 33.