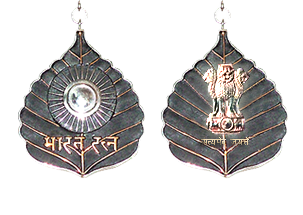 The Bharat Ratna (Hindi pronunciation: [bat rtn]; Jewel of India) is the highest civilian award of the Republic of India. Instituted on 2 January 1954, the award is conferred in recognition of "exceptional service/performance of the highest order", without distinction of race, occupation, position, or sex. The award was originally limited to achievements in the arts, literature, science, and public services, but the government expanded the criteria to include "any field of human endeavour" in December 2011. The recommendations for the Bharat Ratna are made by the Prime Minister to the President, with a maximum of three nominees being awarded per year. The recipients receive a Sanad (certificate) signed by the President and a peepal leaf-shaped medallion. There is no monetary grant associated with the award. Bharat Ratna recipients rank seventh in the Indian order of precedence.

The first recipients of the Bharat Ratna were: the last Governor-General of the Dominion of India and the former Chief Minister of Tamil Nadu C. Rajagopalachari, second President and the first Vice President of India Sarvepalli Radhakrishnan and Nobel Prize Laureate and Physicist C. V. Raman; who were honoured in 1954. Since then, the award has been bestowed upon 48 individuals, including 14 who were awarded posthumously. The original statutes did not provide for posthumous awards but were amended in January 1955 to permit them. Former Prime Minister Lal Bahadur Shastri became the first individual to be honoured posthumously. In 2014, cricketer Sachin Tendulkar, then aged 40, became the youngest recipient; while social reformer Dhondo Keshav Karve was awarded on his 100th birthday. The first singer to be awarded was M. S. Subbulakshmi and the first actor to be awarded was M. G. Ramachandran. Though usually conferred on India-born citizens, the Bharat Ratna has been awarded to one naturalized citizen Mother Teresa, and to two non-Indians: Abdul Ghaffar Khan (born in British India and later citizen of Pakistan) and Nelson Mandela, born in and citizen of South Africa. On 25 January 2019, the government announced the award to social activist Nanaji Deshmukh (posthumously), singer-music director Bhupen Hazarika (posthumously) and to the former President of India, Pranab Mukherjee.

The Bharat Ratna, along with other personal civil honours, was briefly suspended from July 1977 to January 1980, during the change in the national government; and for a second time from August 1992 to December 1995, when several public-interest litigations challenged the constitutional validity of the awards. In 1992, the government's decision to confer the award posthumously on Subhas Chandra Bose was opposed by those who had refused to accept the fact of his death, including some members of his extended family. Following a 1997 Supreme Court decision, the press communiqu announcing Bose's award was cancelled; it is the only time when the award was announced but not conferred.

The bestowals of the posthumous awards of Sardar Vallabhbhai Patel (1991) and Madan Mohan Malaviya (2015) drew criticism, because they died before the award was instituted. 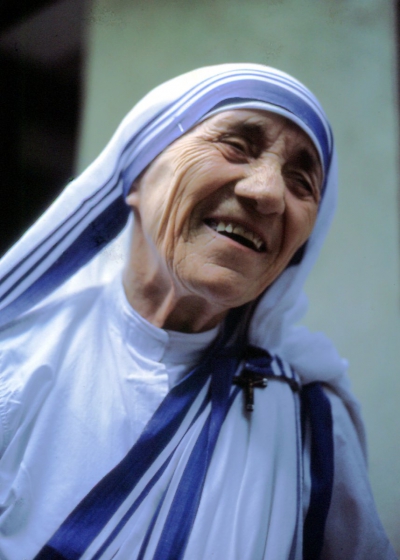 Mother Mary Teresa Bojaxhiu (born Anjezë Gonxhe Bojaxhiu, Albanian: [aˈɲɛzə ˈɡɔndʒɛ bɔjaˈdʒiu]; 26 August 1910 – 5 September 1997), honoured in the Catholic Church as Saint Teresa of Calcutta, was an Albanian-Indian Roman Catholic nun and missionary. She was born in Skopje (now the capital of North Macedonia), then part of the Kosovo Vilayet of the Ottoman Empire. After living in Skopje for eighteen years, she moved to Ireland and then to India, where she lived for most of her life.

In 1950, Teresa founded the Missionaries of Charity, a Roman Catholic religious congregation that had over 4,500 nuns and was active in 133 countries as of 2012. The congregation manages homes for people who are dying of HIV/AIDS, leprosy and tuberculosis. It also runs soup kitchens, dispensaries, mobile clinics, children's and family counselling programmes, as well as orphanages and schools. Members take vows of chastity, poverty, and obedience, and also profess a fourth vow – to give "wholehearted free service to the poorest of the poor."Teresa received a number of honours, including the 1962 Ramon Magsaysay Peace Prize and the 1979 Nobel Peace Prize. She was canonised on 4 September 2016, and the anniversary of her death (5 September) is her feast day. A controversial figure during her life and after her death, Teresa was admired by many for her charitable work. She was praised and criticized on various counts, such as for her views on abortion and contraception, and was criticized for poor conditions in her houses for the dying. Her authorized biography was written by Navin Chawla and published in 1992, and she has been the subject of films and other books. On 6 September 2017, Teresa and St. Francis Xavier were named co-patrons of the Roman Catholic Archdiocese of Calcutta.