Events on July 20 in history 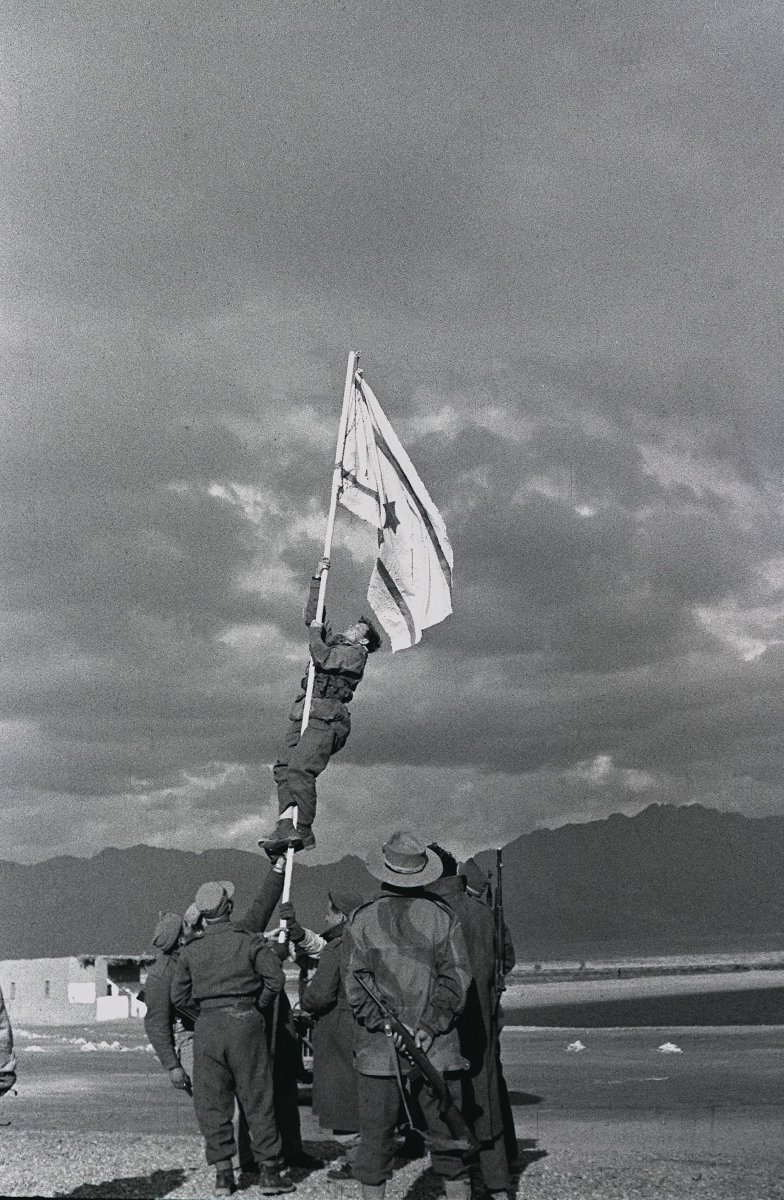 Israel and Syria sign a truce to end their nineteen-month war.

The 1948 (or First) ArabIsraeli War was the second and final stage of the 19471949 Palestine war. It formally began following the end of the British Mandate for Palestine at midnight on 14 May 1948; the Israeli Declaration of Independence had been issued earlier that day, and a military coalition of Arab states entered the territory of British Palestine in the morning of 15 May.

The first deaths of the 19471949 Palestine war occurred on 30 November 1947 during an ambush of two buses carrying Jews. There had been tension and conflict between the Arabs and the Jews, and between each of them and the British forces since the 1917 Balfour Declaration and the 1920 creation of the British Mandate of Palestine. British policies dissatisfied both Arabs and Jews. Arab opposition developed into the 19361939 Arab revolt in Palestine, while the Jewish opposition developed into the 19441947 Jewish insurgency in Palestine. In 1947, these ongoing tensions erupted into civil war following the 29 November 1947 adoption of the United Nations Partition Plan for Palestine, which planned to divide Palestine into an Arab state, a Jewish state, and the Special International Regime encompassing the cities of Jerusalem and Bethlehem.

On 15 May 1948, the civil war transformed into a conflict between Israel and the Arab states following the Israeli Declaration of Independence the previous day. Egypt, Transjordan, Syria, and expeditionary forces from Iraq entered Palestine. The invading forces took control of the Arab areas and immediately attacked Israeli forces and several Jewish settlements. The 10 months of fighting took place mostly on the territory of the British Mandate and in the Sinai Peninsula and southern Lebanon, interrupted by several truce periods.As a result of the war, the State of Israel controlled the area that the UN had proposed for the Jewish state, as well as almost 60% of the area proposed for the Arab state, including the Jaffa, Lydda and Ramle area, Upper Galilee, some parts of the Negev and a wide strip along the Tel AvivJerusalem road. Israel also took control of West Jerusalem, which was meant to be part of an international zone for Jerusalem and its environs. Transjordan took control of East Jerusalem and what became known as the West Bank, annexing it the following year, and the Egyptian military took control of the Gaza Strip. At the Jericho Conference on 1 December 1948, 2,000 Palestinian delegates called for unification of Palestine and Transjordan as a step toward full Arab unity. The conflict triggered significant demographic change throughout the Middle East. Around 700,000 Palestinian Arabs fled or were expelled from their homes in the area that became Israel, and they became Palestinian refugees in what they refer to as the Nakba ("the catastrophe"). In the three years following the war, about 700,000 Jews emigrated to Israel. Around 260,000 Jews moved to Israel from the Arab world during and immediately after the war. 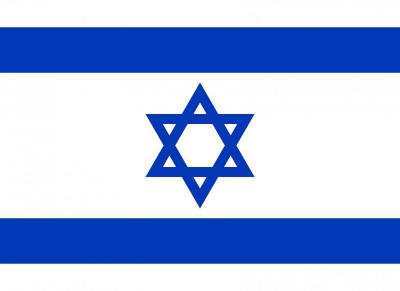 Israel (; Hebrew: יִשְׂרָאֵל, romanized: Yīsrāʾēl; Arabic: إِسْرَائِيل, romanized: ʾIsrāʾīl), officially the State of Israel (מְדִינַת יִשְׂרָאֵל, Medīnat Yīsrāʾēl; دَوْلَة إِسْرَائِيل, Dawlat ʾIsrāʾīl), is a country in Western Asia. It is situated on the southeastern shore of the Mediterranean Sea and the northern shore of the Red Sea, and shares borders with Lebanon to the north, Syria to the northeast, Jordan to the east, and Egypt to the southwest; it is also bordered by the Palestinian territories of the West Bank and the Gaza Strip to the east and west, respectively. Tel Aviv is the economic and technological center of the country, while its seat of government is in its proclaimed capital of Jerusalem, although Israeli sovereignty over East Jerusalem is unrecognized internationally.Israel has evidence of the earliest hominid migrations out of Africa. Canaanite tribes are archaeologically attested in the region since the Middle Bronze Age, while the kingdoms of Israel and Judah emerged during the Iron Age. The northern Kingdom of Israel was destroyed by the Neo-Assyrian Empire around 720 BCE, and the Kingdom of Judah was incorporated into the Neo-Babylonian Empire in 586 BCE. Some of the Judean population was exiled to Babylon, only to return after Cyrus the Great conquered the region. The Maccabean Revolt against Seleucid rule led to an independent Hasmonean kingdom by 110 BCE. The kingdom became a client state of the Roman Republic in 63 BCE, following which the Herodian dynasty was installed by 37 BCE, and in 6 CE, the former kingdom was finally incorporated into the Roman Empire as the province of Judaea (Latin: Iudaea). A series of unsuccessful Jewish revolts against the Romans that broke out during the first and second centuries resulted in the destruction of Jerusalem, the expulsion of many Jews, and the renaming of Iudaea to Syria Palaestina. In the 7th century CE, the Byzantine-ruled Levant was taken by Arab forces and incorporated into the Rashidun Caliphate. It remained in Muslim hands until the First Crusade of 1096–1099 re-established a Christian sovereign presence; Crusader control was partly dismantled by the Ayyubids in 1187, but ultimately lasted until 1291. The Mamluk Sultanate of Egypt extended its control over the region by the end of the 13th century until its defeat in 1516 to the Ottoman Empire. During the 19th century, a national awakening among Jews led to the founding of Zionism, a movement that espouses the return of a Jewish homeland in Palestine, also known as the Land of Israel, which was followed by the immigration of diaspora Jews.

Following World War I, Britain controlled the entirety of the territory of what makes up Israel, the Palestinian territories, and Jordan as a League of Nations mandate. After World War II, the newly formed United Nations adopted the Partition Plan for Palestine in 1947, recommending the creation of independent Arab and Jewish states, and an internationalized Jerusalem. The plan was accepted by the Jewish Agency but rejected by Arab leaders. Following a civil war within Mandatory Palestine between Yishuv and Palestinian Arab forces, Israel declared independence at the termination of the British Mandate. The war internationalized into the 1948 Arab–Israeli War between Israel and several surrounding Arab states and concluded with the 1949 Armistice Agreements that saw Israel in control of most of the former mandate territory, while the West Bank and Gaza were held by Jordan and Egypt respectively. Israel has since fought several wars with Arab countries, and since the Six-Day War in June 1967 has occupied several territories, and continues to occupy the Golan Heights and the Palestinian territories of the West Bank, including East Jerusalem, and the Gaza Strip, though whether Gaza remains occupied following the Israeli disengagement is disputed. Israel has effectively annexed East Jerusalem and the Golan Heights, though these actions have been rejected as illegal by the international community, and established settlements within the occupied territories, which the international community also considers illegal under international law. Efforts to resolve the Israeli–Palestinian conflict have not resulted in a final peace agreement, while Israel has signed peace treaties with both Egypt and Jordan, and more recently has normalized relations with a number of other Arab countries.

In its Basic Laws, Israel defines itself as a Jewish and democratic state, and as the nation-state of the Jewish people. The country is a liberal democracy with a parliamentary system, proportional representation, and universal suffrage. The prime minister serves as head of government and the Knesset is the unicameral legislature. Israel is a developed country and an OECD member, and has a population of over 9 million people as of 2021. It has the world's 31st-largest economy by nominal GDP, and is the most developed country that is currently in conflict. The standard of living in Israel is the highest in the Middle East, and the country ranks high on the global HDI list. Israel also ranks among the world's top countries by percentage of citizens with military training, percentage of citizens holding a tertiary education degree, research and development spending by GDP percentage, women's safety, life expectancy, innovativeness, and happiness.