Events on October 2 in history 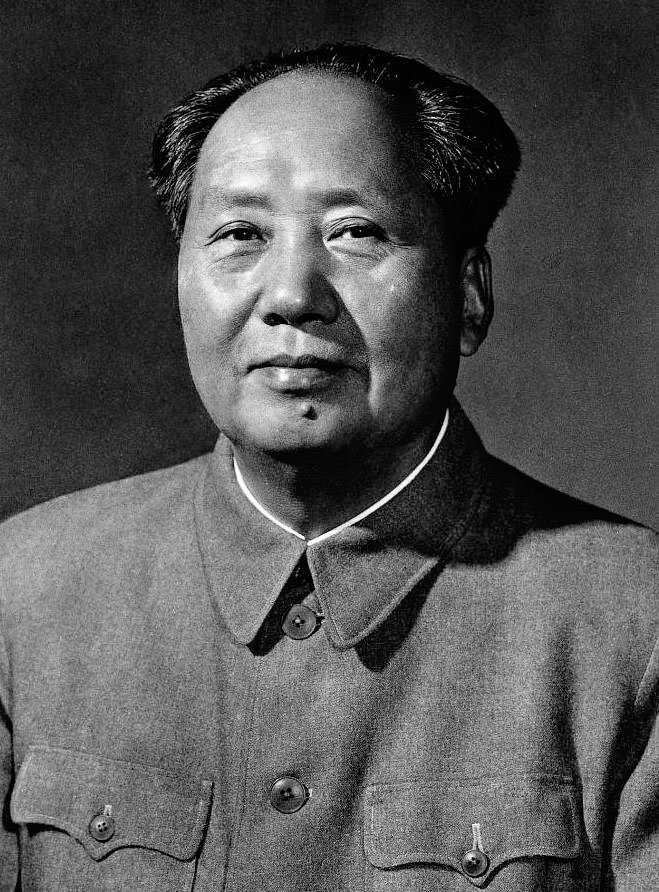 The Soviet Union recognises the People's Republic of China, proclaimed the previous day by Mao Zedong.

Mao Zedong (26 December 1893 9 September 1976), also known as Chairman Mao, was a Chinese communist revolutionary who was the founder of the People's Republic of China (PRC), which he led as the chairman of the Chinese Communist Party from the establishment of the PRC in 1949 until his death in 1976. Ideologically a MarxistLeninist, his theories, military strategies, and political policies are collectively known as Maoism.

Mao was the son of a prosperous peasant in Shaoshan, Hunan. He supported Chinese nationalism and had an anti-imperialist outlook early in his life, and was particularly influenced by the events of the Xinhai Revolution of 1911 and May Fourth Movement of 1919. He later adopted MarxismLeninism while working at Peking University as a librarian and became a founding member of the Chinese Communist Party (CCP), leading the Autumn Harvest Uprising in 1927. During the Chinese Civil War between the Kuomintang (KMT) and the CCP, Mao helped to found the Chinese Workers' and Peasants' Red Army, led the Jiangxi Soviet's radical land policies, and ultimately became head of the CCP during the Long March. Although the CCP temporarily allied with the KMT under the Second United Front during the Second Sino-Japanese War (19371945), China's civil war resumed after Japan's surrender, and Mao's forces defeated the Nationalist government, which withdrew to Taiwan in 1949.

On 1 October 1949, Mao proclaimed the foundation of the PRC, a MarxistLeninist single-party state controlled by the CCP. In the following years he solidified his control through the Chinese Land Reform against landlords, the Campaign to Suppress Counterrevolutionaries, the "Three-anti and Five-anti Campaigns", and through a psychological victory in the Korean War, which altogether resulted in the deaths of several million Chinese. From 1953 to 1958, Mao played an important role in enforcing planned economy in China, constructing the first Constitution of the PRC, launching the industrialisation program, and initiating military projects such as the "Two Bombs, One Satellite" project and Project 523. His foreign policies during this time were dominated by the Sino-Soviet split which drove a wedge between China and the Soviet Union. In 1955, Mao launched the Sufan movement, and in 1957 he launched the Anti-Rightist Campaign, in which at least 550,000 people, mostly intellectuals and dissidents, were persecuted. In 1958, he launched the Great Leap Forward that aimed to rapidly transform China's economy from agrarian to industrial, which led to the deadliest famine in history and the deaths of 1555 million people between 1958 and 1962. In 1963, Mao launched the Socialist Education Movement, and in 1966 he initiated the Cultural Revolution, a program to remove "counter-revolutionary" elements in Chinese society which lasted 10 years and was marked by violent class struggle, widespread destruction of cultural artifacts, and an unprecedented elevation of Mao's cult of personality. Tens of millions of people were persecuted during the Revolution, while the estimated number of deaths ranges from hundreds of thousands to millions. After years of ill health, Mao suffered a series of heart attacks in 1976 and died at the age of 82. During Mao's era, China's population grew from around 550 million to over 900 million while the government did not strictly enforce its family planning policy.

A controversial figure within and outside China, Mao is still regarded as one of the most influential figures of the twentieth century. Beyond politics, Mao is also known as a theorist, military strategist, and poet. During the Mao era, China was heavily involved with other southeast Asian communist conflicts such as the Korean War, the Vietnam War, and the Cambodian Civil War, which brought the Khmer Rouge to power. He ruled China through an autocratic and totalitarian regime responsible for mass repression as well as destruction of religious and cultural artifacts and sites. The government was responsible for vast numbers of deaths with estimates ranging from 40 to 80 million victims through starvation, persecution, prison labour, and mass executions. Mao has been praised for transforming China from a semi-colony to a leading world power, with greatly advanced literacy, women's rights, basic healthcare, primary education and life expectancy. 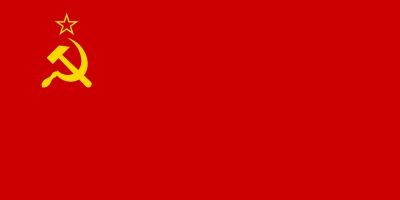 The Soviet Union, officially the Union of Soviet Socialist Republics (USSR), was a communist state that spanned Eurasia from 1922 to 1991. It was nominally a federal union of multiple national republics; in practice its government and economy were highly centralized until its final years. The country was a one-party state (prior to 1990) governed by the Communist Party of the Soviet Union, with Moscow as its capital within its largest and most populous republic, the Russian SFSR. Other major urban centers were Leningrad (Russian SFSR), Kiev (Ukrainian SSR), Minsk (Byelorussian SSR), Tashkent (Uzbek SSR), Alma-Ata (Kazakh SSR) and Novosibirsk (Russian SFSR). It was the largest country in the world, covering over 22,402,200 square kilometres (8,649,500 sq mi), and spanning eleven time zones.

The Soviet Union had its roots in the October Revolution of 1917 when the Bolsheviks, headed by Vladimir Lenin, overthrew the Provisional Government that had earlier replaced the house of Romanov of the Russian Empire. They established the Russian Soviet Republic, the world's first constitutionally guaranteed socialist state. Tensions escalated into a civil war between the Bolshevik Red Army and many anti-Bolshevik forces across the former Empire, among whom the largest faction was the White Guard. The White Guard engaged in violent anti-communist repression against the Bolsheviks and suspected worker and peasant Bolsheviks known as the White Terror. The Red Army expanded and helped local Bolsheviks take power, establishing soviets, repressing their political opponents and rebellious peasants through Red Terror. By 1922, the balance of power had shifted and the Bolsheviks had emerged victorious, forming the Soviet Union with the unification of the Russian, Transcaucasian, Ukrainian and Byelorussian republics. Upon the conclusion of the civil war Lenin's government introduced the New Economic Policy, which led to a partial return of a free market and private property; this resulted in a period of economic recovery.

Following Lenin's death in 1924, Joseph Stalin came to power. Stalin suppressed all political opposition to his rule inside the Communist Party and inaugurated a command economy. As a result, the country underwent a period of rapid industrialization and forced collectivization, which led to significant economic growth, but also led to a man-made famine in 1932–1933. The Gulag labour camp system was also expanded in this period. Stalin also fomented political paranoia and conducted the Great Purge to remove his actual and perceived opponents from the Party through mass arrests of military leaders, Communist Party members, and ordinary citizens alike, who were then sent to correctional labor camps or sentenced to death.

On 23 August 1939, after unsuccessful efforts to form an anti-fascist alliance with Western powers, the Soviets signed a non-aggression pact with Nazi Germany. After the start of World War II, the formally neutral Soviets invaded and annexed territories of several Eastern European states, including the eastern regions of Poland, Lithuania, Latvia and Estonia. In June 1941 the Germans invaded, opening the largest and bloodiest theater of war in history. Soviet war casualties accounted for the majority of Allied casualties of the conflict in the process of acquiring the upper hand over Axis forces at intense battles such as Stalingrad. Soviet forces eventually captured Berlin and won World War II in Europe on 9 May 1945. The territory overtaken by the Red Army became satellite states of the Eastern Bloc. The Cold War emerged in 1947, where the Eastern Bloc confronted the Western Bloc, which would unite in the North Atlantic Treaty Organization in 1949.

Following Stalin's death in 1953, a period known as de-Stalinization and the Khrushchev Thaw occurred under the leadership of Nikita Khrushchev. The country developed rapidly, as millions of peasants were moved into industrialized cities. The USSR took an early lead in the Space Race with the first ever satellite and the first human spaceflight and the first probe to land on another planet, Venus. In the 1970s, there was a brief détente of relations with the United States, but tensions resumed when the Soviet Union deployed troops in Afghanistan in 1979. The war drained economic resources and was matched by an escalation of American military aid to Mujahideen fighters.

In the mid-1980s, the last Soviet leader, Mikhail Gorbachev, sought to further reform and liberalize the economy through his policies of glasnost and perestroika. The goal was to preserve the Communist Party while reversing economic stagnation. The Cold War ended during his tenure and in 1989, Warsaw Pact countries in Central and Eastern Europe overthrew their respective Marxist-Leninist regimes. Strong nationalist and separatist movements broke out across the USSR. Gorbachev initiated a referendum—boycotted by Lithuania, Latvia, Estonia, Armenia, Georgia, and Moldova — which resulted in the majority of participating citizens voting in favor of preserving the Union as a renewed federation. In August 1991, a coup d'état was attempted by Communist Party hardliners. It failed, with Russian President Boris Yeltsin playing a high-profile role in facing down the coup. The main result was the banning of the Communist Party. The republics, led by Russia and Ukraine, declared independence. On 25 December 1991, Gorbachev resigned. All the republics emerged from the dissolution of the Soviet Union as independent post-Soviet states. The Russian Federation (formerly the Russian SFSR) assumed the Soviet Union's rights and obligations and is recognized as its continued legal personality in world affairs.

The Soviet Union produced many significant social and technological achievements and innovations regarding military power. It boasted the world's second-largest economy and the largest standing military in the world. The USSR was recognized as one of the five nuclear weapons states. It was a founding permanent member of the United Nations Security Council as well as a member of the OSCE, the WFTU and the leading member of the Council for Mutual Economic Assistance and the Warsaw Pact.

Before its dissolution, the USSR had maintained its status as a superpower, alongside the United States, for four decades after World War II. Sometimes also called "Soviet Empire", it exercised its hegemony in East-Central Europe and worldwide with military and economic strength, proxy conflicts and influence in developing countries and funding of scientific research, especially in space technology and weaponry.