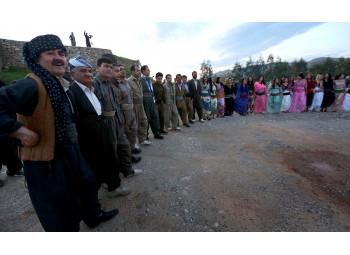 Eid Nowruz is the title given to the Iranian New Year, also known as the Persian New Year, which has been observed by several communities for more than 3,000 years despite its Zoroastrian radices. The observance usually falls on the 21st of March, coinciding with the March equinox, with various festivities according to each country, although commonly, people gather and dance together to welcome the spring season. Eid Nowruz has roots in traditional Iranian religions –pre-Islamic era– such as Zoroastrianism. In Zoroastrianism, atar (fire) is a primary symbol of sight and goodness, and was used by Zoroastrians to defy Angra Mainyu, the omnimalevolent demon; symbolizing their hatred for evil. Whereas in Kurdish legends, the day commemorates the salvation of the Kurds from a despot, and it is viewed as a way of showing support for the Kurdish cause.

The next occurrence of Eid Norooz is marked in red